Curfew enforced to quell unrest between Muslims and Buddhists in Sri Lanka. 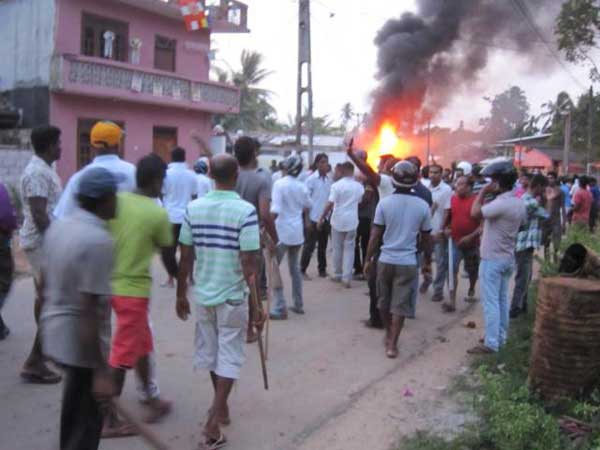 – Eyewitnesses said mobs pelted a mosque with stones and set fire to Muslim owned shops after a protest march over monk attacked by Muslim youth.

It all began on last Thursday after a Buddhist monk and his driver was attacked by a group of Muslim youth in Darga Town, a southern town in Sri Lanka. The unrest grew as Buddhist fractions got aggravated over the cowardly act by the group from Muslim dominated area. Many shops of both fractions were burnt or damaged by mobs in the area. Following clashes among Buddhists and Muslim groups the police has employed special task force officers to deal with the mobs.

Three days ago when a Buddhist monk was passing Darga Town, a town in southern sri lanka where almost total population are Muslims, three men group had interrupted the monk stopping the vehicle and attached both the monk and his driver. Following this the monk has made a complaint at the police station.

Subsequent to the complaint the culprits were arrested and the Buddhists from surrounding areas have demanded that they should make a public apology from the monk and be punished by law the law thereafter. However, police has refused the request from the public gathered.

Nevertheless the tense situates continue to grow as shops of both fractions were attacked by mobs while security forces are deployed to tackle the situation. According to sources a few youth from both ethnic groups were injured and admitted to hospitals.

Constitution of Sri Lanka prioritizes the place for Buddhism as main religion to be protected and access & operation for other religious groups remains open. There is absolutely no restriction in Sri Lanka for any religious group to operate. However there seem to be a trend where this freedom is often manipulated by various Islam fractions.

Three individuals who were arrested will be produced at courts today.

Muslims form about 10 percent of the 20 million population of Sri Lanka.