One of the greatest ever Olympic inspirations 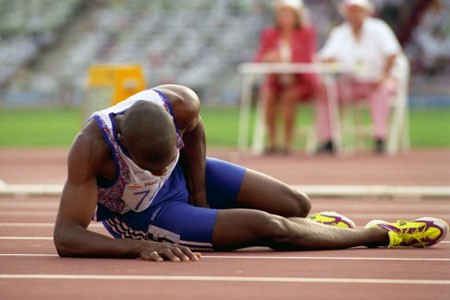 His name was Derrick Redman. He was a runner for Great Britain in the 1992 Olympics in Barcelona, Spain. He tried to make it in the 1988 summer Olympics but he was injured and he had to make a decision, “Do I go through all the work for four more years to get to the 92 Olympics?” But he made a decision to run again to honor his father who had supported him all of his life.

Derek qualified for the 1992 Olympics which was an amazing feat since he had undergone twenty-two surgeries on his Achilles’ tendon. He qualified to be in the semi finals of the men’s 440 meter race. He was in one of the center lanes, the gun fired and he shot out of the blocks leading the pack. The starters gun fired and Redmond set off. 140 meters down the track he was in a strong position when his hamstring gave way. He collapsed to the ground in a ball of pain and tears. Medics ran out to assist him but Redman waved them away. He was determined to finish the race, even if he couldn’t win it. And so he crawled and hobbled his way along the track.

There was a commotion in the crowd and a man ran down from the grandstands. He pushed his way through the security guards and ran on to the track towards his son. It was Jim Redman, Derrick’s father. He placed an arm around Derek.

“You don’t have to do this” Jim told his son.

“Yes I do” Derek replied.

“Well then” said Jim, “we’re going to finish this together”

Just before they reached the finish line, with the crowd screaming in support, Jim Redmond let his son go, so that he could cross the line on his own.

After the race Derrick Redman was interviewed and he said “My father was the only person who could have helped me, because he understood everything that I had been through.”

Derrick Redmond on his experience

‘We hobbled over the finishing line with our arms round each other, just me and my dad, the man I’m really close to, who’s supported my athletics career since I was seven years old. I’ve since been told there was a standing ovation by the 65,000 crowd, but nothing registered at the time. I was in tears and went off to the medical room to be looked after.

My dream was over. In Seoul four years earlier I didn’t even get to the start line because of an Achilles injury and had “DNS” – Did Not Start – next to my name. I didn’t want them to write “DNF” – Did Not Finish – in Barcelona.

‘When I saw my doctor he told me I’d never represent my country again. I felt like there’d been a death. I never raced again and I was angry for two years.  Then one day I just thought: there are worse things than pulling a muscle in a race, and I just decided to get on with my life.

‘If I hadn’t pulled a hamstring that day I could have been an Olympic medalist, but I love the life I have now. I might not have been a motivational speaker or competed for my country at basketball, as I went on to do. And my dad wouldn’t have been asked to carry the Olympic torch this year, which was a huge honor for him.

………In the days after the race Redmond received scores of messages from his fellow competitors, including this from a Candian competitor he had never met: