A three – day meeting of around 25 Tibetan Buddhist scholars and His Holiness the Dalai Lama concluded today at the latter’s residence here. 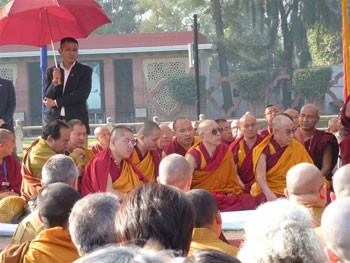 The Tibetan leader who had just returned from a four nation Europe tour addressed the gathering which was made up of around 25 Tibetan Buddhist scholars from around the world. His Holiness expressed his pleasure over the work of the scholars in coming up with the draft of a two-volume book on Buddhist Science and Philosophy at the meeting that began on Monday.

The discussion was attended among others by the editorial board of the book, led by Thomtok Rinpoche, abbot of Namgyal monastery and invited guest Prof Samdhong Rinpoche, former Kalon Tripa and an academician.

Speaking to the Media, Thomtok Rinpoche, head of the editorial board said, “The meeting is finalizing the contents of two volume texts on Buddhist science excerpted from Kagyur and Tengyur texts with a hope that it could serve the human kind irrespective of religion and differences.” The editors said the two-volume book on Buddhist Science can prove beneficial not just for all Buddhist followers but also scientists and researchers who are studying human mind.

“The book is not biased, it just tells what Buddha has preached,” added the editors. “It neither forces the readers to believe what Buddha had preached nor we have tried to give our own opinion.” The editorial board also noted that the Dalai Lama was very pleased with the discussion and had appreciated their work.

In 2010, Dalai Lama gave a speech on the importance of Buddhist science and Buddhist philosophy, and expressed a wish how such a book could be helpful not only to Buddhist followers but also to non -Buddhists and non – believers.

The two books on Buddhist Science are expected to be published this year and will be translated into English, Hindi, Chinese and 17 other languages.