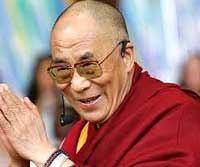 Tibetan spiritual leader His Holiness the Dalai Lama today said that Buddhism and Buddhist culture are two distinct things. “While Buddhism relates to individual, Buddhist culture relates with the society,” His Holiness said today at the first day of the teachings on A Guide to the Bodhisattva’s Way of Life”

His Holiness Dalai Lama began the two and a half day teaching at the request of a group of Southeast Asians associated with the Tibetan Buddhist Centre based in Singapore.

His Holiness had completed till chapter seven of the “A Guide to the Bodhisattva’s Way of Life” and will continue from Chapter 8 during this session which will run from September 3 to 5.

Promoting religious harmony and understanding among the world’s major religious traditions has been one of the three commitments of His Holiness the Dalai Lama. He asked his disciples to respect other religions and maintain unity among all the religious traditions. “Because all religions preach kindness, compassion and the need to become a good human being.”

He also emphasized that development of a good heart is important along with the material development. “Material development is necessary, we have this body so we need some facility (to) bring physical comfort and it is very important. If all our physical and mental energy concentrate only on material values, then it is quite unfortunate. We have this marvelous human intelligence.”

His Holiness will leave for a ten day tour of Europe beginning September 9 in Latvia. His Holiness will also visit Czech Republic, Lithuania and Germany during which he will give public talks, teachings. The Tibetan leader will also participate in a Human Rights Forum in Prague alongside Burmese democracy icon and fellow Nobel Laureate Aung San Suu Kyi. The Human Rights Forum was started by the late Czech President and Velvet Revolution icon Vaclav Havel and American Holocaust survivor Elie Wiesel in 1997.