While Denmark and Japan kills, Greece going step ahead by upholding the ban on captive dolphin performances……. 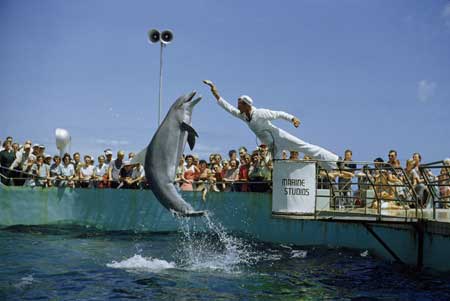 Good news, animal friends! While one part of the world goes all out killing precious sea life creatures, Greece moves forward respecting dolphins by upholding the ban on captive dolphin performances. You need no extrapolated explanation how lovely these creatures are. Most of all, they are men’s best friends, very generous and helpful creatures.

After their 2012 decision to ban captive animal performances was recently challenged by the Attica Zoological Park in Spata, Greece, the Greek parliament has overwhelmingly voted in favor of upholding the ban!

Attica Zoological Park, which exhibits a wide variety of exotic animals, had tried to convince members of the parliament to amend or weaken the ban on captive dolphin shows on the basis that such performances are “educational.”

However, as Mark J. Palmer, associate director of the International Marine Mammal Project, put it, “Such tricks are not natural behavior – they are instead trained to do the tricks using food deprivation. If they don’t perform the trick, they don’t eat. In addition, exposing the dolphins to the stress of having to perform in front of yelling crowds (they can hear well both in and out of the water) and having the dolphins push trainers on their sensitive rostrum hardly qualifies as exercise or educational.”

Palmer said that when these articles were originally introduced, “world leaders and animal activists took note and praised the courage and morals of the Greek government as it took a stand in a difficult situation.”

On the country’s decision to uphold the ban in spite of the pressure they were facing, he added, “The Greek Parliament is to be congratulated for their support for the welfare of dolphins and refusal to accept what are essentially circus acts with dolphins as being ‘educational.’”

With this latest piece of good news and the U.K.’s soon-to-be official ban on the use of all animals in circuses, it looks as though awareness is slowly but surely growing that exploiting animals for the sake of human entertainment is NOT okay. Now, if only we could get SeaWorld to end their dolphin and orca performances too.