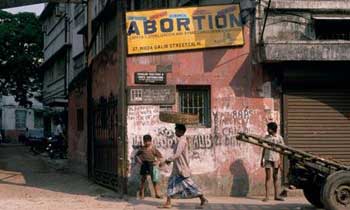 The world today is full of various types of discrimination. News breaks from various parts of the world relating diverse discrimination cases and that not only limited to humans but also to wildlife and environment. However we bring you this report for you to understand what happens in India that world may not know much about.

Raw data from India’s census released in March showed 914 girls under age 6 for every 1,000 boys. A decade ago, many were horrified when the ratio was 927 to 1,000. This year’s Indian census revealed that there are about 7.1 million fewer girls than boys under the age of six. The gap has grown substantially since the 2001 census, which found 6 million fewer girls, and the 1991 census, 4.2 million fewer. Researchers studied census data and government surveys of more than 250,000 births to conclude that gap is even wider in families that already have a girl. 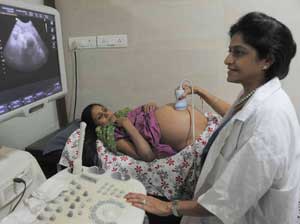 The missing daughters occurred mostly in families which already had a first born daughter. “The number of girls being aborted is increasing and may have reached 12 million with the lower estimate of 4 million over the last three decades,” said lead author Professor Prabhat Jha at the Center for Global Health Research in Toronto, Canada. Other researchers included the former Registrar General of India, Jayant K. Banthia.

Those numbers show that a 1996 law that bans testing for the gender of a fetus has been largely ineffective, the study said. In families whose first child was a boy, there was no decrease in the girl to boy ratio for the second child, the study said.

“Reliable monitoring and reporting of sex ratios by birth order in each of India’s districts could be a reasonable part of any efforts to curb the remarkable growth of selective abortions of girls,” the authors suggested.

The factbook puts India’s birth ratio at 893 girls to 1,000 boys. In some places of India there are  even less than  700  girls for 1000 boys. India tracks gender ratios for children under the age of 6 but not at birth. It may be a surprise to some that the decline in the number of girls is more pronounced in richer and more educated households, according to research published in the medical journal Lancet.

Different side of the story 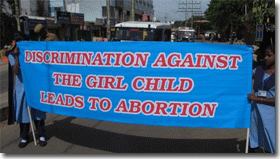 Amartya Sen, the Nobel Prize winning economist said in 1990, that   “””more than 100 million women are missing.  ‘In India, China and some other countries in the world , girls are killed, aborted & abandoned  because they are girls. The United Nations estimates as many as 200 million girls are missing in the world today because of gendercide. 50 million missing campaign fighting gendercide in India.  Gendercide is war on women”””

Abortion is legal, but  sex-selective abortion is not legal in India. Some people have tried to talk about law. Those women who have killed their own female fetuses, cried out, ‘law, what is law? Will the law come to my aid when my husband throws me out of the house or kills me for giving birth to yet another girl! Will the law help me when my husband marries again in the hope of a son? Can the law change the way society looks at me because I have no son! ‘
If the woman cannot provide a son, her life is torn asunder by strife. To put it bluntly, the message flashed by society – and this is what people really think, no matter what they say – is that, if you have two sons, you have two eyes. If you have one son, you are blind in one eye. And if you have two daughters, you are completely blind. 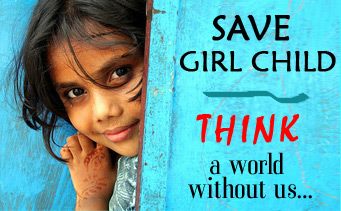 The women who support female feticide also say, ‘why should we let them live? We do not want any girl. Should we let girls be born so that they suffer the way we are suffering? They say, what good does being alive do to us? It is better that an insufferable life ends before it can begin. It is better to go straight to heaven than stay alive and endure the kicks and blows of the world.’ Are they wrong in saying this?

Once upon a time, people in patriarchal society would run temple to temple and pray to god    for a son, they would spend extravagantly on saints and hermits, but now there is no need of  magic charms and spells, a medium even stronger than god has come to India –  science. Scan machines, amniocentesis and other scientific tests reveal the sex of the embryo in the womb – if the sex is not right then it is got rid of. The right sex is masculine, the wrong sex feminine. The healthy sex is masculine, the disabled  sex feminine.

Girls are quickly disappearing. Anti-women traditions  have been carefully preserved over the ages. There are quite a few communities, which regard   sons as  only offspring, and not daughters. Till 1980, infant girls used to be killed after they were born. Feticide had not caught on. Despite being banned, the incidence of feticide is on the rise. It makes one afraid that as long as the status of girls in society does not improve, there is no way these murders, this bloodshed, can be prevented. 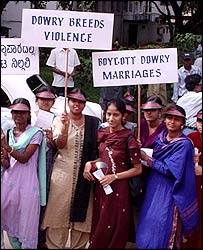 We say,  if women are educated and self-reliant, then female infanticide and female feticide will stop. Most people believe that these occur among the poor and the uneducated. But, in fact, the opposite is true. The study shows  in India the ratio of girls to boys is the most skewed in South Delhi, a place where the rich and the educated live. It is here that the maximum number of girls go missing. Down from 904 to 845 in just 10 years. 24,000 girls disappear from South Delhi every year. The Patels of Gujarat are a wonder. Traditionally rich peasants, there is no trace of girls in their villages. It’s femicide, the systematic killing of women.  A holocaust going on against girls across the country.

Since infant girls have been murdered over the ages, female feticide today does not go against anti-women tradition. It is like weeding – plucking off girls from the soil of the womb reserved for the production of sons. There is nothing surprising about murdering daughters in a race that has always been thirsty for sons.  Killing of girl children was probably in vogue from the ancient Vedic age. The Atharva Veda says, Let girls be born elsewhere, let boys  take birth here. Son is wealth. Son is a blessing. The son will be the father’s strength in old age. The father will go to heaven if the son lights his funeral pyre. It is the son who will rescue the father from hell.

Female feticide is causing social imbalance.  Now brothers share a wife. The murder of girls has led to such an acute shortage of girls that an exchange system has been initiated. According to this system, parents agree to give their daughter in marriage on the condition that the groom’s sister marries the bride’s brother. “Bride Trafficking” has started. Men  are  now ‘recycling’ the use of women for sex and reproduction.

Now a days men  want educated wives. So  girls are getting educated so that they can sell well in the marriage mart. An educated wife can do the shopping, pay the bills, look after the children’s studies, and solve problems at school, all on her own. A man said,  my wife has a postgraduate degree in Maths, all the better since she can help the kids with the homework. So I don’t need to engage a tutor for them. And why should my wife work outside the home? We don’t need any extra money in the family. She has a lot to do at home. 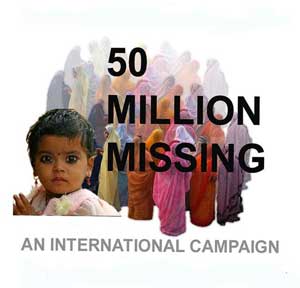 The money women  earn is known as extra money. University degrees are meant to help the kids with their homework, nothing else. The norm is that middle class girls will not work after marriage.Only those girls, who badly need money for survival or those girls whose money  husbands want,  get permission to work outside the house.

Alas! So much for education! Educated girls have to pay more dowry. The more educated a girl is, the more educated husband she demands. And thus the amount of dowry required also escalates. Many people think that a handsome dowry enhances the dignity of the girl. However, dowry never improves the status of a girl in her in-laws’ house, rather it results in loss of dignity. The more dowry is paid, the more the girl’s status at her in-laws will deteriorate. The husband is not supposed to pay dowry, no matter how educated the girl is, no matter how grand the job she holds. The ‘Brides Wanted’ column is clear testimony to the value of girls in this society. Wanted: A fair complexion, beautiful, educated, homely girl from a respectable family. ‘Homely girl’ means a girl who will spend all 24 hours of the day on domestic chores, one who will not hold a job. ‘Respectable family’ means a family that will pay a handsome dowry. If the groom comes from an affluent family, it does not mean that a poor dowry will do, rather the dowry must be all the more generous. When this is the condition, why will people not believe that the birth of a girl means entails huge expenses! Girls are an inferior race – this belief is ingrained in both men and women across India. And since a girl belongs to an inferior race, dowry is needed to get rid of her. 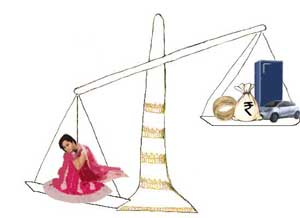 The abortion clinics display an advertisement. Spend Rs 500, you’ll save Rs. 50,000. In other words, kill this one. If this one lives, you’ll lose Rs. 50,000 in dowry.  For those yearning for a son, the sex determination clinics are modern temples.

This society is not a fit place for girls, so it is better not to allow them to be born. This logic is something like this: there is too much shouting and screaming all around, the noise pollution is giving one a headache, so it is better to chop off the head. Many claim that if women themselves choose the gender of the child before giving birth, then they will be saved from many undesired pregnancies.   How helpless she must be not to have the slightest control over the fetus growing inside her womb! Women are compelled to yield to societal as well as many kinds of family pressure and opt for abort a female fetus. An undesired pregnancy is not as terrible as this forsaken, helpless, undignified, disgraceful condition of women.

If the practice of female feticide continues as they are now, it will not be very many decades before there will be not a single girl in the country, only men. The good thing will be that men will find no more girls to torture trample rape and kill.