I Have a Dream: You ever had time listening to this great speech? 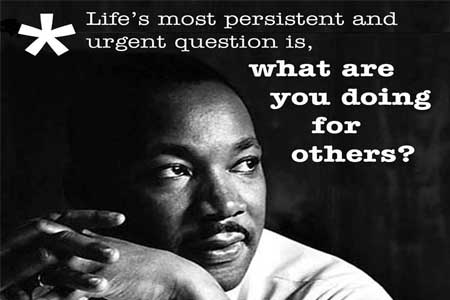 Once we die we will only be remembered by just a handful for few days, one or two for years. That’s the nature of humans. But if you are someone who did something great for the mankind, for the betterment of the human race, you will forever be remembered. The pleasure it can add you at the death bed is something greater than any joy a human will face. What is your interest in making this place a better world? What is your dream?

When we let freedom ring, when we let it ring from every home, village and every hamlet, from every state and every city, we will be able to speed up that day when all of us, black men and white men, Jews and Gentiles, Protestants and Catholics, Buddhists and Islamists will be able to join hands and say together we are all for each other. “Let us not seek to satisfy our thirst for freedom by drinking from the cup of bitterness and hatred.” Even in the face of having to confront such inhuman maltreatment and sickening prejudice, Dr. King was always a force for unity and brotherhood. He knew how to fight the good fight while still being a peacemaker. What a brilliant man, definitely one of the greatest Americans to ever live.

He was a genius. He was focused on his message. No one could dispute him because he appealed to the core values of mankind. He did not ask for special privileges. All he aid was that every citizen of USA should have a chance to live life with dignity – that was the least anyone can ask for. His speech is beautiful and inspiring. He made a change in the world so great, and used no means of violence to convey such a powerful message. An amazing man he was and forever will be. Thank you MLK for making this world a better place for millions of people.

Previous articleHomeless Elderly couple awarded with a new house built by young group
Next articleSimon as usual rudely Stops Boy from Singing – Then He Blows Simon Away!
Digital Media