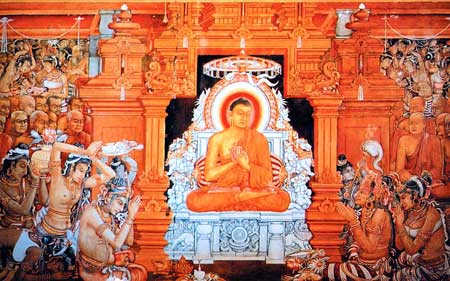 Today is Duruthu Poya Day, which is the observance of the Buddha’s first visit to Sri Lanka.

The Gautama Buddha’s first visit to Sri Lanka. (nine months after his Enlightenment) was to Mahiyangana, in the Uva Province of Sri Lanka. His mission was to restore peace, to create a state of freedom from war or violence.

At the time the inhabitants of this country were Yakkhas who were humans and descendants of King Rawana and his brother, Vibhishana. Yakkhas and Nagas were in constant confrontation. There is still a belief that the Buddha’s visit to Sri Lanka was spurred by an invitation by the God Sumana Saman to mediate and settle the dispute.

The most remarkable event that took place at the visit of the Buddha was the presence of the god Sumana Saman, the guardian God of Sri-Pada who attained the State of Sothapanna after listening to the preachings of the Buddha.

In accordance with the ancient chronicles, the Buddha had handed over the God Sumana Saman a hair relic when he begged Thathagatha to give something to worship on His first visit to the island.

The Buddha’s second visit to this island was to Nagadipa in the fifth year of His Buddhahood, to resolve a dispute over a gem set throne between two Naga Kings, Mahodara and Chulodara.

Kelaniya is the third place visited by the Thathagatha on a Full Moon Poya Day of Vesak in the eighth year of his Buddhahood. On this visit, he also visited “Samantha Kuta’ (Sri Pada Kanda), ‘Dheegavapi’, ‘Mahamegavanarama’, the place where later the ‘Thuparama’ was built at Anuradhapura, the place where the stone-cetiya now ‘Selacaitya’ has been built in Anuradhapura from where he returned to Jethavanaramaya’.

With the first visit of the Enlightened One this country was purified and our motherland was made suitable soil for Arahant Mahinda Maha Thera to establish Buddhism. We, the present population of this country are fortunate to have pure Buddhism in our land.