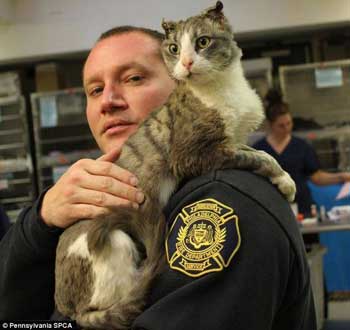 A cat in recovery after being cruelly set ablaze in Philadelphia earlier this month has been adopted by a local firefighter. Lieutenant Stephen Paslawski said Campbell chose him by climbing onto his shoulder almost immediately when he visited the local PSPCA shelter.

PSPCA officials said Paslawski was one of the first people to get in touch about adopting Campbell after news of the horrific attack broke. ‘I was disgusted that anyone could do this to any animal,’ said Paslawski.’I had recently put another cat I had down due to a large tumor, and with me being a firefighter, Campbell being burned, and the loss of my other cat, it just seemed like a perfect fit,’ he said.

‘After a few minutes of petting him in the cage, he put his paws up on me and climbed onto my shoulder as if to say, I choose you. I knew right then it was meant to be. He’ll have a loving home for the rest of his life.’ Campbell will be in the PSPCA shelter hospital’s care for a few more weeks due to the severity of his burns, then Pawdlawski will take him home to join his other cat, Tink.

Two suspects have been charged in this case. Tyrique Hall and Jose Sanchez were charged with Conspiracy, Possession of an Instrument of Crime, and Cruelty to Animals.  They face up to ten years each in jail, reports 6ABC. An eyewitness told the PSPCA that she saw a cat in flames running down a street in the Olney neighborhood on Sunday, November 10 and heard one of the men saying, ‘I put a lot of fluid on it.’