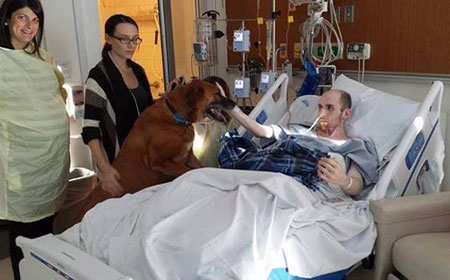 Mike Petrosino, a 21-year-old who was recently diagnosed with terminal cancer, was given a chance to say goodbye to his dog, Rusty, who was brought to Massachusetts General Hospital for a final visit.

Not surprisingly, the heartbreaking photo of the moment — shared by Petrosino’s family members — has gone viral since a friend posted it to Reddit.

“My friend Mike was diagnosed with cancer in the 8th grade,” the friend explained on Saturday. “He was given a 3% chance to survive the first year. Two days ago we found out that after 8 years, the amputation of his leg, and four rounds of cancer that there’s now nothing that they can do. This picture was taken by his brother yesterday.”

“Rusty was very emotional when Mike said his finale goodbye,” John Petrosino, Mike’s brother, told The Blaze. “Every time I come home these past two days, he sits near Mike’s favorite couch and whines, which is rare from him.”

An online fund to help pay Petrosino’s medical bills has raised more than $7,600.

“I just got back from Mass General and got to say goodbye with a bunch of old friends,” the friend added. “He’s the bravest guy I’ve ever met and all he did the entire day was making sure everyone else was okay.”