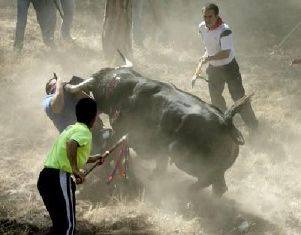 The Toro de la Vega “festival” takes place every September in the autonomic region of Castilla y Léon, Spain. The event entails chasing a young bull through the streets of Tordesillas and stabbing him with darts and spears until he is bleeding and crippled. His tail is cut off while he is still alive. When he dies of his injuries, the person who ultimately kills him is awarded a ceremonial spear and a medal by the City Council.

Instead of celebrating the town’s culture, this event shows a callous disregard for animals. It is unacceptable to harass, torment and kill animals in the name of culture or tradition, and such senseless spectacles have no place in civilized society.

Please use every resource you have and stand against animal cruelty. Do not go for circus, avoid animal flesh, and voice against cultural parades like this.  These poor animals deserve a better life. They do not deserve such pain. As humans we cannot act barbaric. It’s a horror. If you see any petition just sign it. You never know the impact of your signature alone can make.  Make others aware of the importance of being compassionate.

Previous articleYour dinner table may be full of cruelty!
Next articleAre You Defined By Your Possessions – Drop the Illusions
Digital Media