“Even the most ordinary person can turn the tide” 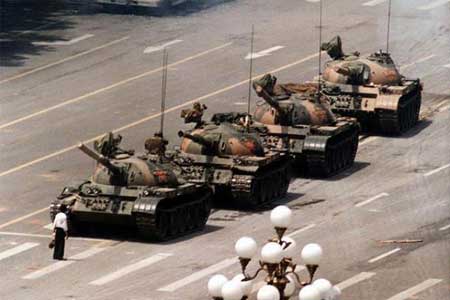 We bring you this footage to remind you that there were people who died for you. They were the people w help us develop to what we are today. Some fought violent struggles while others chose better ways. They chose peaceful demonstrations and non violent demonstrations.  This is yet another similar incident. Non Violent yet determined to protecting their rights.

One day after Tiananmen massacre

JUNE 5, 1989 : Following weeks of huge protests in Beijing and the bloody crackdown from June 1 till the morning of the 5th (resulting in the deaths of many hundreds maybe thousands), ONE LONE MAN stepped in front of a column of tanks that just left Tiananmen Square, rumbling over E. Chang’an Avenue.

This moment instantly became a SYMBOL of the Chinese protests and its unique film footage (along with several photographs) became one of the most famous images of the 20th century, as well as one of the strongest international symbols AGAINST OPPRESSION worldwide:

The unknown rebel, aka ‘TANK MAN’, has unblocked a true way to mankind’s collective consciousness with his anonymous and heroic, -nonviolent- act of eternal defiance.

Previous articleJim B Tucker tells stories of children who believe they are reincarnated: Amazing!
Next articleThe Amazing Cancer Kid: Kid who won the cancer battle when doctors themselves gave up
Digital Media