A married father-of-four emerged from his tornado shelter on Sunday and was able to count his blessings that his family had survived – but there was still someone special missing.

Jonathan Byler Dann stood amid the rubble of his home in Washington, Illinois and looked desperately for the family’s beloved dog Maggie. Their pet, who has been with the family since she was four months and is now 11 years old, had refused to leave her kennel as the EF4 tornado barreled towards them on Sunday. 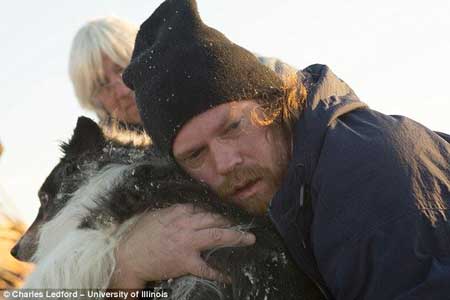 Jonathan Byler Dann hugs dog Maggie close after finding her buried beneath the rubble of his destroyed home in Washington, Illinois

After emerging from under the rubble of his home, a heartbroken Mr Dann posted a picture on Facebook of his obliterated house on Monday and added the message: ‘We lost Maggie today.’

However there was some good news for Mr Dann, his wife Rebecca Jane and four children aged eight, five, two and a half and 18 months old. After 30 hours of digging through the remains of their house a faint bark could be heard and Maggie was found – buried but very much alive. 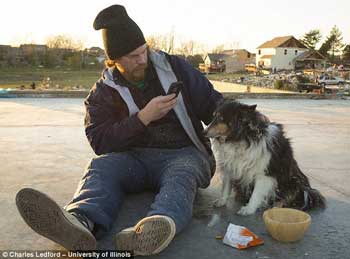 Jon Byler Dann survived the EF4 tornado that struck Illinois on Sunday in the basement of his house clutching his four children and wife. He found Maggie the dog 30 hours later buried in the rubble of his home

The father posted a picture of his beloved companion on Monday with the message: ‘Maggie found!!!’

Mr Dann told weather.com: ‘I felt intense relief and elation but also just panic. I’m very thankful and blessed to have my wife and my children. And finding my dog today was just unreal.’ Maggie suffered dislocated hip but is being treated at the Teegarden Veterinary Clinic.

On Sunday night, 81 separate twisters were reported across the Midwest.

The devastating storm outbreak brought winds of up to 200mph that flattened hundreds of homes and killed six people. Residents of Washington, a downstate town of 15,000, were left to pick up the pieces and begin recovering from the disaster.

Mayor Gary Manier said authorities were keeping evacuated residents away out of concern that the remaining structures were dangerously unstable. Manier estimated that 250 to 500 homes had been destroyed by the tornado, rated as the second-most powerful magnitude of twister, which hit the city east of Peoria with winds of 166 to 200 miles per hour.

The storm killed three people in Massac Country, two in Washington County and one in the city of Washington, in Tazewell County, said Patti Thompson of the Illinois Emergency Management Agency.