A final goodbye: Zoo worker dying from a cancer gets a kiss from giraffe 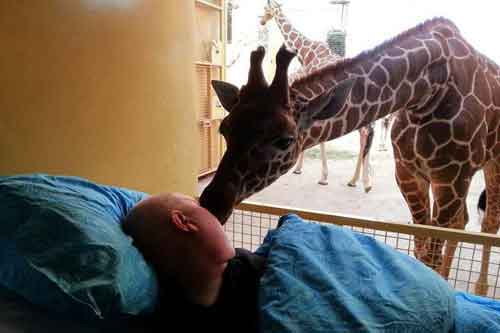 Heart-breaking pictures have emerged of the moment a giraffe said goodbye to a terminally ill zoo worker, who had spent most of his adult life cleaning the animal’s enclosures. This moment of a giraffe saying a special goodbye to the dying zoo worker is touching the hearts of viewers worldwide.

As reported by The Independent, Mario, a zoo maintenance worker with terminal cancer, asked the Netherland’s Ambulance Wish Foundation for help visiting Rotterdam’s Diergaarde Blijdorp zoo, where he cleaned animal enclosures for nearly 25 years. The wish was granted, and what happened during the visit amazed everyone.

The 54-year-old is confined to a bed, so the Ambulance Wish Foundation transported him to the zoo with a specially designed ambulance. He got wheeled around the zoo in his hospital bed, and upon entering the giraffe enclosure, one of the tall animals approached Mario, bent down and gave him a kiss.

The Ambulance Wish Foundation, which transported Mario to the zoo, said Mario has little mobility and finds speaking very difficult. “However, his face spoke volumes”, they said. 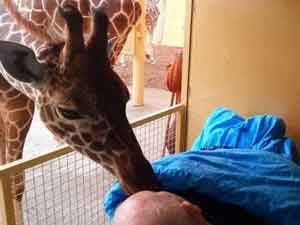 “These animals recognised him, and felt that (things aren’t) going well with him,’ Kees Veldboer, the founder of the AWF told Dutch newspaper Algemeen Dagblad.

“(It was) a very special moment. You saw him beaming.”

A 2007 study in the New England Journal of Medicine found one cat could identify people who were dying of a terminal illness at a nursing home.

Oscar the cat appeared to ‘predict’ a patient’s death by sitting next to their bed and keeping a vigil there until they died, which was usually a few hours later.

If he was forced out of the patient’s room he would become distressed and would continue to meow outside the door, researchers noted.

Previous articleBorrowing Hope from Future
Next articleThis Could Be The Best Motivational Video You’ve Ever Seen. Please Do Watch It
Digital Media