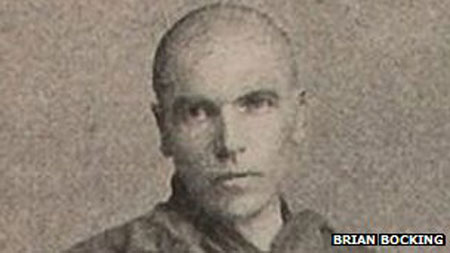 Here’s a bit of history trivia for you. The BBC has a feature story about a man believed to be the first western-born Buddhist monk. And he didn’t exactly fit the mold of a scholarly romantic searching for an idealized religion, as many of the first western Buddhists were.

Laurence Carroll is thought to have been born in Dublin in 1856. He left Ireland as a teenager and traveled to America. Carroll got work on a San Francisco/Yokohama shipping line, but he was fired — reportedly for drunkenness — and left stranded in Japan. He made his way to Burma, which at the time was a province of British India, and found employment with a logging company.

It was in Burma that Carroll came into contact with Buddhist monks. Professor Brian Bocking, head of the School of Asian Studies at the University College Cork, thinks the monks may have helped Carroll with his drinking problem. The exact date of Carroll’s own ordination seems to have been lost, but he was fully ordained before 1900. He took the name Dhammaloka, meaning “light of the dhamma.

Carroll is mostly remembered today for making speeches for temperance and against British colonialism and Christian missionaries. He was hauled into court a couple of times for sedition. The second time, in 1910, he was bound over to a judge for a year and eventually required to pay a fine.

I’d love to know what bothered Carroll more — the Christian missionaries or British colonialism. He was Irish, after all, and he would have been old enough to remember the Fenian Uprising and other protests against British rule of Ireland. He is believed to have died sometime between 1913 and 1915.