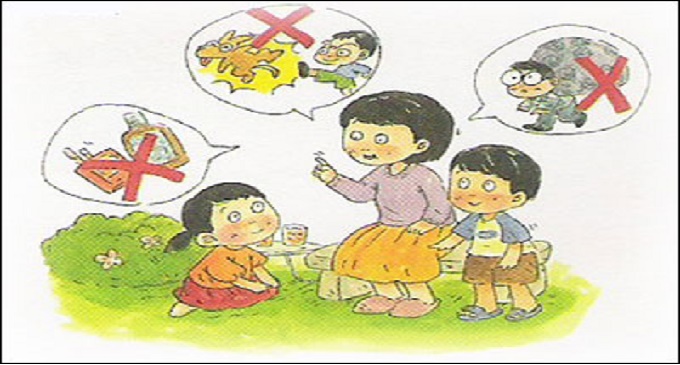 All religions have some basic rules that define what is good conduct and what kind of conduct should be avoided. In Buddhism, the most important rules are the Five Precepts .

These have been passed down from the Buddha himself.

No killing
The Buddha said, “Life is dear to all beings. They have the right to live the same as we do.” We should respect all life and not kill anything. Killing ants and mosquitoes is also breaking this precept. We should have an attitude of loving-kindness towards all beings, wishing them to be happy and free from harm. Taking care of the earth, its rivers and air is included. One way that many Buddhists follow this precept is by being vegetarian.

No stealing
If we steal from another, we steal from ourselves. Instead, we should learn to give and take care of things that belong to our family, to the school, or to the public. No sexual misconduct Proper conduct shows respect for oneself and
others. Our bodies are gifts from our parents, so we should protect them from harm. Young people should especially keep their natures pure and develop their virtue. It is up to them to make the world a better place to live. In happy families, the husband and wife both respect each other.

No lying
Being honest brings peace into the world. When there is a misunderstanding, the best thing is to talk it over. This precept includes no gossip, no back-biting, no harsh words and no idle speech.

No intoxicants
The fifth precept is based on keeping a clear mind and a healthy body.

One day, when the Buddha was speaking the Dharma for the assembly, a young drunkard staggered into the room. He tripped over some monks who were sitting on the floor and started cursing loudly. His breath reeked of alcohol and
filled the air with a sickening stench. Mumbling to himself, he reeled out the door. Everyone was astonished at his rude behavior, but the Buddha remained calm. ”Great assembly!” he spoke, “Take a look at this man! He will certainly lose his wealth and good name. His body will grow weak and sickly. Day and night, he will quarrel with his family and friends until they abandon him. The worst thing is that he will lose his wisdom and become stupid.” Little by little, one can learn to follow these precepts. If one sometimes forgets them, one can start all over again. Following the precepts is a lifetime job. If one kills or hurts someone’s feelings by mistake, that is breaking the precepts, but it was not done on purpose……