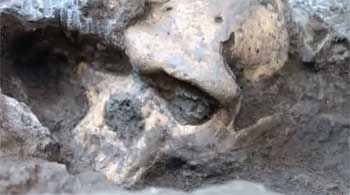 The discovery of a complete hominid skull and other fossil remains in Dmanisi, Georgia, suggests that the earliest members of the Homo genus – currently split into half a dozen distinct species – actually belonged to a single species:

.
.
Homo erectus. These early human ancestors probably just had a wide range of physical appearances, say researchers in the journal Science. The skull is 1.8m years old and has a small braincase, a long face and large teeth, a combination of features not previously seen in other early Homo fossils