Get to know Buddhist Archaeological Sites in Bangladesh

There are a number of important Buddhist archeological sites located in what is present-day Bangladesh. Historically, Bangladesh was once part of greater India and known as East Bengal. To understand the significance of these sites, one must consider the overall context of Indian archeology and the development of Buddhism in certain locations. This area (of Bangladesh) refers to Paharpur in Naogaon, Mahasthangarh in Bagura, Mainamati in Comilla  and Bikrampur in Dhaka district. Each site in these areas has unique qualities as part of history. Some archaeological sites in Bangladesh are important for both Hindu and Buddhist investigation because religious sculptures of each can be found.

Historically, the Pala Dynasty, a series of Buddhist rulers spanning 7th – 12th Centuries, dominated Bengal. Under their patronage many world famous monasteries were built, the remains of which are revealed in the archaeological sites in Bangladesh. Due to political exclusion, when Hindu and Muslim Rulers dominated Bengal, many important monasteries and stupas were rebuilt and replaced by the later construction. As a result, what we see today is not necessarily the original Buddhist construction, but a combination of historical changes. 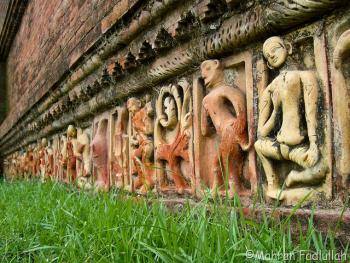 Extant travel records from Chinese pilgrims that visited throughout greater India (Faxin in 5th C., Xuanzang in 7th C.) helped provide clues for archeologists to uncover lost Buddhist heritage sites. In 1879-80, Sir Alexander Cunningham’s archeological expeditions in selected areas were carried out in Paharpur and Mahasthangarh, districts in present-day Bangladesh. He also reported on Bhasu Vihar, near  Mahasthangarh. Later excavations by other archeological teams revealed monastery remains in Paharpur, which proved to be the biggest Buddhist monastery in the sub-continent.  It is noteworthy to mention that the outstanding achievement of Cunningham was his identification to such Buddhist heritage sites, and these are landmark archeological sites in Bangladesh. On the basis of Cunningham’s original expedition, a subsequent number of archeologists’ scholarly achievements have been written up and published over the years.

The first scheme on the archeological studies in Bengal was conducted by Vangiya Sahitya Parishad in Calcutta in 1893-94. The Parishad progressively built up a rich collection of sculptures. In 1905, the Parishad  has been flourished in Rangpur, Rajshahi, Dhaka and Comilla and each one having own collection of sculptures. In 1914, the director of Dhaka Museum, Mr. Nalini Kanta Bhattasali, traveled extensively to Mainamati, Vikrampur, etc., and two of his works are particularly noteworthy for reference: a)Iconography of Buddhist and Brahmanical Sculptures in the Dacca Museum,  and  b) The Coins and Chronology of the Early Independent Sultans of Bengal. Following his travels and reports, a museum was established called Varendra Research Museum in 1919.  It is part of the University of Rajshahi. As years passed, the fieldwork and research at the archeological sites in Bengal were neglected for a long time due to geographical difficulty, access to remote locations from the main centers of the subcontinent, and mostly lack of government support. Since the independence of Bangladesh (1971) the government has undertaken a number of field projects including excavations. This work is providing fresh evidence about the mostly Buddhist archeological sites,  and new aspects of Bangladesh’s cultural history. 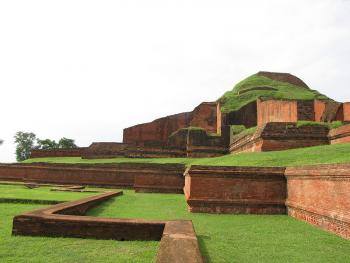 The monument at Paharpur was first excavated in 1922-23 and it is considered the largest monastery in the Indian sub-continent. It is known as the Sompura Mahavihara, located  in Rajshahi district. The excavation continued until 1934 and a report was published in 1938 as “Memories No. 55 of the Archaeological Survey of India”. The origin dates to the Pala Dynasty in 8th century. The site covers an area of 27 acres of land that includes a quadrangular court measuring more than 900 feet. The external walls on each side stand about 16 feet in thickness, and measure 12 feet to 15 feet in height.  The total complex of 177 rooms has 45 rooms on the north side and 44 in each of the other three sides. The excavated findings have been preserved at the Varendra Research Museum in Rajshahi. It is interesting to note that the Borobudur temple in Indonesia was the contemporary of Paharpur Buddhist Monastery as their foundation.

According to research, the Sompura Mahavihara was so glorified in Tibet during the 9th -12th century that many Tibetan monks visited to Mahavihara. The world famous Buddhist scholar Atish Dipanka Srijnan (11th C.) stayed at the Mahavihara for many years. It is one of the most important archaeological sites in Bangladesh, and declared as a UNESCO World Heritage Site in 1985.

At Mainamati the principle monument is the Shalban Vihara which is the main interest here. During Mr. Nalini Kanta Bhattasali’s tour, he found several Buddhist sites including Shalban Vihara  and reported his findings in his book Iconography of Buddhist and Brahmanical Sculptures in the Dacca Museum(1929). It is mentioned that about 55 scattered ancient remains of settlements from the 8th – 12th century AD known as Mainamati Lalmai are located throughout the Comilla district. The Shaban Vihara is the middle of the Mainamati range and consists of 115 small rooms. Excavations have continued since 1955, and items such as copper plates, gold and silver coins, and more than 150 bronze statues have been found. The largest number of stone sculptures and terra-cotta plaques have been found in Comilla’s archeological sites, representing Bengal and the sub-continent. Many items can be seen in the Mainamati site museum, which is the richest in artifacts amongst other museums in Bangladesh. The excavations of the Mainamati sites are noteworthy for revealing previously unknown facts about Bangladesh’s political, religious, historical and Buddhist architecture. B.M. Morrison’s book, Lalmai -A Culture Center of Early Bengal, An Archaeological Report and Historical Analysis(1974), documents these findings. 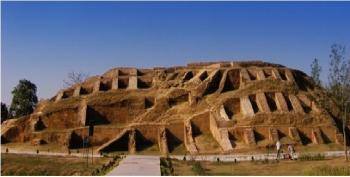 The Mahasthangarh archaeological site is the oldest site in Bangladesh. It is a known Hindu site and considered a great sacred place. In 1907, the excavations revealed gold ornaments, coins and terra-cotta objects, which are now preserved in the Mahasthangarh Museum. Although it is not as well known for Buddhists, there are probable remains of the Gupta and Pala period temples which are remarkable for both Buddhists and Hindus. During 1928-29, the excavations at Mahasthangarh uncovered buildings thought to be Hindu religious, such as Govinda Bhita and Lakshmindarer Medh.

During Cunningham’s tour, he identified this site six kilometers north-west of Mahasthangarh. Excavations have exposed two large Buddhist monasteries and a medium-sized Buddhist shrine. In 1970-80s further excavations revealed a small monastery consisting of 37 small rooms.  From the Bhasu Vihara  site, bronze statues and terra-cotta plaques have been found. The buildings indicate three types of religious architecture(monasteries, shrine and cruciform structure)as mentioned by Monica L. Smith in the book called The Social Construction of Ancient Cities(2003).

The Halud Vihara is located 15 kilometers west-south-east of the Paharpur Buddhist Monastery. There are many scattered ancient monuments, including a large area mound 100  feet across and 25 feet high. The Department of Archaeology of Bangladesh excavated the site in 1984 and 1993 and found stone items, metal images, terra-cotta plaques and ornamental bricks. Unfortunately, local people are building houses on the south-eastern corner of the monument today and damaging the integrity of the site. Approval is pending (since application in 1999) to recognize this site on the World Heritage List, but progress is slow. 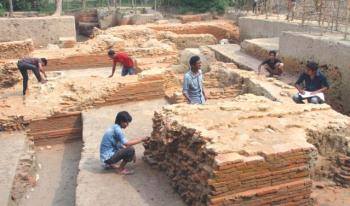 The excavation on the Buddhist Vihara in Bikrampur of the Dhaka district was jointly conducted by the Department of Archaeology of Jahangirnagar University and the Agrasar Bikrampur Foundation. After four years’ effort a Buddhist monastery was completely unearthed by March 2013. More than 100 statues and sculptures have been found in the monastery site. The Project researcher Sufi Mostafizur Raham said that the monastery is related to Atish Dipankara Srijnan (980-1054), a renowned Buddhist scholar who was born in Bikrampur. The ruling government of Bangladesh announced that The discovery of a new Buddhist Vihara here will invite in a new era to our history and heritage.

It is noteworthy to mention that archeological researchers in Bangladesh are asking the government for increased budgetary allocations in order to preserve the important cultural heritage sites in this country. And with good reason – Bangladesh is somewhat of a forgotten repository of the South Asian Buddhist heritage, and it is high time that its sites are given the attention and care they deserve.