*This broadcast was given for the Australian Broadcasting Corporation Radio 1, Science Unit as an Ockham’s Razor talk. The text in its entirety is below.

There’s a crisis of epic proportion occurring on our planet 24/7, 365: ‘The War Against Nature’ has become a prolonged looting spree — plundering terrestrial and oceanic wildlife on a global tear never witnessed before. The fact that the Mafia, Syndicate, Cartel and Triad’s are involved heavily in shark fining, slaughtering bluefin tuna, massacring rhinos, elephants and tigers — as the demand for rhino horns, elephant ivory, fur and animals parts skyrockets — means these incredible beasts and others have no chance whatsoever to continue to live on planet Earth. 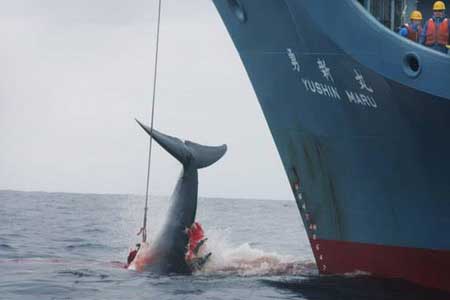 What kind of a world are we leaving for our children?

The destruction of nature including illegal harvesting of forests for an unquenchable palm oil market and trafficking of animal parts is valued in excess of $300 billion, annually; it now rivals that of drugs, arms and human trafficking, combined. No wonder organized crime is running this lucrative life-ending business. 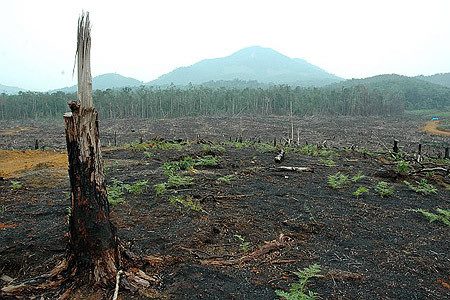 And even more infuriatingly Japan, Iceland and Norway continue to hunt whales despite a 1986 worldwide moratorium. Japan harpoons whales in the Great Southern Ocean within an international sanctuary where populations of great whales are no more than three percent of what they were a mere 200 years ago. Japan claims to hunts whales under the auspice of scientific research, which is simply not true. 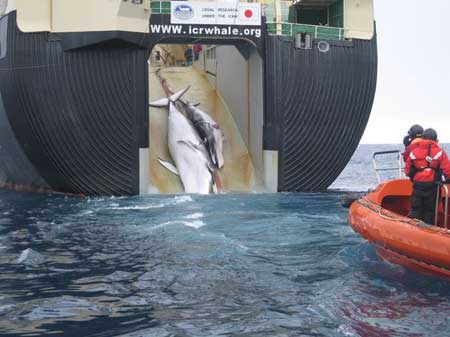 Japan’s ‘scientific whale research’ is overtly flawed. If, in fact, they were testing a hypothesis then their factory boat the Nisshin Maru’s reaction to harassment by the Sea Shepherd ships during the 2012-13 whaling season would have ended the research sampling for that season. Instead, the Nisshin Maru fled, followed by one of its catcher boats, to the other side of the Antarctic continent, thousands of kilometers from its designated research area where it resumed killing minke whales. A real research program is based upon systematic, pre-planned sampling in a designated area within a designated time frame. Japan’s ‘lethal research’ of whales in the Antarctic has nothing to do with ‘scientific research.’

Poaching has reached a frenzied level elsewhere. The pictures of magnificent rhinos dehorned while still alive in Kruger National Park, South Africa, are enough to make a grown man cry. These atrocities are crimes against humanity. 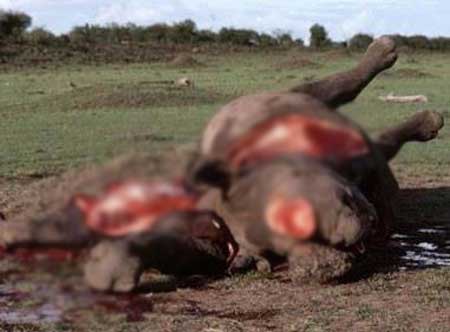 A bloody rhino dehorned — one of tens of thousands of brutal examples of bloody thirsty poachers annihilating these exquisite beasts.

Organized gangs, often from neighboring Mozambique, of four to six men are well-armed and carrying devices facilitating constant communications. They infiltrate communities, buy information on rhino whereabouts and then devise two escape routes — while at the same time familiarizing themselves with security structures and movements of park rangers. It’s cold, calculated, ruthless murder!

These depraved poachers shoot the rhinos in their knees, slice their Achilles tendon’s and spine’s thereby immobilizing them whilst sawing and hacking off horns weighing 7 kilograms with a street value of well over 500,000 dollars U.S. These colossal creatures are then left to bleed to death, slowly.

These heartless thugs organize pick-ups, which hide horns and weapons for collection later on. They quickly change into fresh clothes and shoes — as boot prints can link them to the crime scene, when inspected at follow-up roadblocks. Large sums of cash are immediately paid to poachers upon delivery of rhino horns.

Organized crime has established and structured nefarious business models, which operate locally and like the wide base of a pyramid it moves upward from regional to national couriers, buyers and exporters to their international counterparts, supplying international buyers who sell to international nouvelle riche consumers at the top.

The price of the rhino horn varies from 65,000 to 100,000 dollars U.S. a kilogram. At the top end of this range rhino horn per kilogram is about two and a half times more valuable than 24K gold.

This voracious demand for rhino horn is coming from Vietnam, China and Thailand. In 2010, a rumor began circulating that a Vietnamese minister’s relative was cured of cancer by rhino horn powder. In addition, Chinese medicine routinely uses rhino horn powder to purportedly cure a range of ailments from rheumatism to ridding the soul of the devil.

The number of Oriental nouvelle riche is burgeoning. In Vietnam alone, since 2008 the number of millionaires has increased by 150 percent. At the same time, Vietnamese cancer rates are spiking by 30 percent annually — in large part due to horrendous Vietnamese environmental degradation.

Sadly, rhino horn is now seen in the Orient as a status symbol and it has become a magnet for the nouvelle riche. Ground-up rhino horn powder is being touted as a cure for hangovers, common colds and it’s even being used as a party drug.

In fact, scientists have irrefutably shown that rhino horn, which is comprised of keratin, is about as effective at curing cancer, common colds, or hangovers — as eating a human finger nail (which by the way is also made up of keratin). There is nil medicinal value in rhino horn.

In September of 2013 in Hwange National Park, Zimbabwe, poachers — the scourge of our planet — annihilated 90 more African elephants by poisoning their watering hole with cyanide. Earlier in September of 2013, in the park, they poisoned 40 elephants in an attempt to feed the insatiable Asian demand for ivory, which now fetches 2,200 dollars U.S. a kilogram. 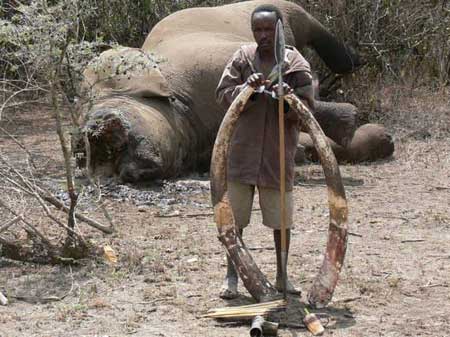 Ruthless ivory poachers driving these majestic beasts to extinction in the bloody and ruthless ‘War Against Nature.’

To give you some idea of how quickly earthlings are exterminating elephants in 1980 there were about 1.2 million African beasts. Last year the estimate was at most 400,000 remaining. Since 2002, the African forested elephant population has plummeted by 76 percent. In Tanzania alone the population estimate in 2008 was approximately 165,000 — today there are fewer than 23,000 elephants left.

The Obama Administration led by Hillary Clinton has pledged to step-up the fight to save the elephants. In September of 2013, 6 tons of ivory was seized in the U.S. And earlier in 2013, the Philippines announced that it had crushed 15 tons of elephant ivory. There are simply not enough animals remaining on the planet at the current rate of this prolonged pillaging of 21 tons of elephant ivory confiscated within one year. An even more maddening question is: How many more tons are being gobbled up each year on the black market? Unknown, vast quantities.

What has happened to earthlings?

Humans are so unconscious and detached from the natural world that the media headlines now report one heinous act against nature after the next attempting to best one another in brutality and illegal sales of animal parts.

These unimaginable atrocities against nature: killing whales, dolphins, bluefin tuna, sharks, polar bears, grizzly bears, African lions, Sumatran and Indian tigers, South American jaguars to name but a few apex predators — are crimes against humanity! Without predators to keep prey fit and cull the old and weak, diseases will spread, ecosystems will crumble and the human race will perish. 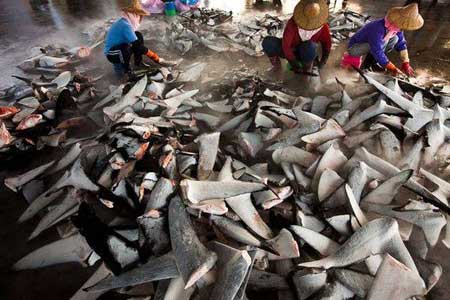 The insatiable Oriental demand for sharkfins used in sharkfin soup is driving sharks to extinction after successfully standing the test of time for 400 million years.

My colleagues have clearly shown that both filter feeding whales like humpbacks and large- and small-toothed whales including the dolphins play an essential role in keeping the web of sealife intact and vibrant. The filter feeders fertilize the ocean with their nitrogen-rich flocculent fecal plumes, stimulating phytoplankton, enriching the marine ecosystem and creating abundant fisheries. Toothed whales cull the old and weak fish and seal populations preventing diseases from reaching epidemics thus ensuring a high level of fitness throughout the seas.

Relentless scouring of the seafloor for the last remaining oil and gas deposits is delivering the coup the grace to whales and dolphins.

In the spring of 2012 over 900 long-beaked common dolphins and black porpoises washed-up in a mass mortality event on Peruvian shores. Government officials stating that the dolphins died of natural causes like morbillivirus did not convince my colleagues and me.

The conservation group Orca Peru undertook 30 necropsies from three separate expeditions. What they discovered was indeed disturbing and contrary to the Peruvian Production Minister Gladys Triveno’s claim on Radio Programas del Peru that ‘the death of the dolphins were not caused by any human activity.’

Off the coast of Peru, oil production from BPZ Energy’s Corvina and Albacora field, in fact, conducted a series of powerful seismic tests during the first half of 2012.

Orca Peru scientists found that the dolphins and porpoises they examined exhibited bleeding in their middle ears as well as fractured skulls. In addition, lungs, livers, stomachs, bladders, skin, spleens and blubber all displayed gas bubbles. Those bubbles caused a mass destruction of tissues. In scientific parlance they revealed acute pulmonary emphysema or what scuba divers know and fear as decompression sickness or the bends. There was no evidence whatsoever of morbillivirus in any of the 30 necropsies.

What happened to those magnificent Peruvian beasts appears to have re-occurred in September 2013, but this time along the West African coast of Ghana.

High tech marine airguns are used offshore for seismic oil and gas exploration. They produce high levels of low frequency sound by releasing high-pressure air into the water creating oscillating bubbles within the bandwidth of 70-140 Hertz. They are deployed as an array to maximize the power and focus the potent low frequency sonar. It is deadly for all whales and dolphins. Multi-beam echo-sounders searching for every last drop of gas and oil in Loza Lagoon, northwest Madagascar shattered the whales ear-drums and caused a fatal mass stranding.

‘The War Against Nature’ specifically the whales and dolphins began raging early in 2014 as the U.S. Navy started training exercises including deepsea explosions and sonar testing along the East Coast, Gulf of Mexico, Southern California and Hawaii, running them until 2019.

‘The War Against Nature’ specifically the whales and dolphins is set to rage beginning early 2014 as the U.S. Navy will start training exercises including deepsea explosions and sonar testing along the East Coast, Gulf of Mexico, Southern California and Hawaii, running them until 2019.

The U.S. Navy announced that computer models predicted hundreds of whales and dolphins would die whilst thousands will suffer serious injuries, and millions will temporarily loose their hearing and suffer major behavioral changes including getting lost.

We know that both baleen or filter feeding and toothed whales are of paramount importance to help maintain Earth’s beleaguered marine ecosystems. Why since the 1986 Moratorium on Whaling has Japan, Iceland, Norway and Danish Faroe Islanders slaughtered almost 32,000 of these exquisite creatures? These countries exhibit a repugnant sense of entitlement to slaughter whales.

We are knowingly leaving our children impoverished oceans, and as Captain Paul Watson of the Sea Shepherd Conservation Society rightfully says: ‘If the whales die, we die!’ 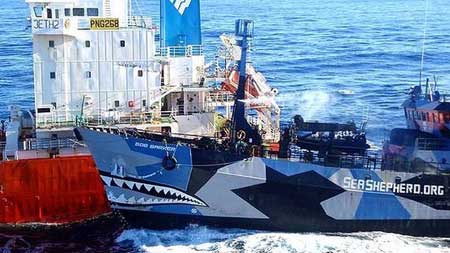 The legendary Animal Kingdom protector Bob Barker believes that all wild animals deserve to live free in the wild. Make a difference and support Sea Shepherd Australia as they valiantly protect the great whales of the Southern Ocean within an international whale sanctuary.

Humans cannot live without Nature. Nature, on the other hand, can totally exist without us. It’s time to end ‘The War Against Nature’ now — And protect the remaining great whales, dolphins, rhinos, elephants, big cats, polar bears, grizzly bears, gorillas, bluefin tunas, sharks, sea turtles and my favorite the albatross from despicable poachers.

Earth Dr Reese Halter is an award-winning broadcaster, distinguished conservation biologist, educator and co-author of Life, The Wonder of It All.