It’s a banner week for the end of the world, because we’ve officially pushed atmospheric carbon levels past their dreaded 400 parts per million. Permanently.

According to a blog post last Friday from the Scripps Institution of Oceanography, “it already seems safe to conclude that we won’t be seeing a monthly value below 400 ppm this year—or ever again for the indefinite future.” Their findings are based on weekly observations of carbon dioxide at Hawaii’s Mauna Loa Observatory, where climate scientists have been measuring CO2 levels since 1958.

What’s so terrifying about this number? For several years now, scientists have been warning us that if atmospheric carbon were allowed to surpass 400 parts per million, it would mark a serious “milestone.” In 2012, the Arctic was the first region on Earth to cross this red line. Three years later, for the first time since scientists had begun to record them, carbon levels remained above 400 parts per million for an entire month. 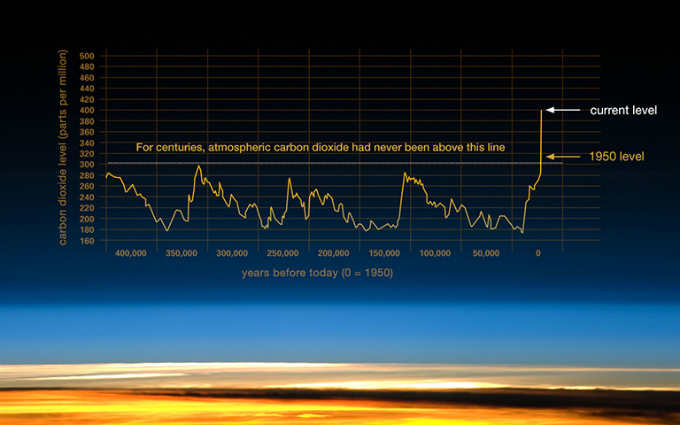 This time, experts believe we’re stuck here for good, due to the cyclical effects of Mauna Loa’s CO2 curve. Carbon levels usually reach an annual low point near the end of September, Scripps notes, but this year, those numbers are hovering around 401 parts per million. There’s a chance that we’ve haven’t seen 2016’s lowest carbon levels yet, but the institution deems that occurrence “almost impossible.”

If there’s an inkling of a silver lining here, it’s that scary numbers could scare people into action. For example, the Paris Agreement—an international convention dedicated to fighting climate change and its effects—has laid out some firm goals directly tied to carbon levels.

All countries who adopt the agreement are bound to prevent global average temperatures from rising beyond 1.5°C above pre-industrial levels. One of the primary means for achieving that will be to limit emissions, and enforce ambitious clean energy mandates. However, the 60 nations who have ratified the agreement so far only account for 47.76 percent of the world’s carbon emissions.

So in light of that, here are some of climate change’s other permanent effects, listed in no particular order.

No explanation required here. While difficult to estimate, extinction rates have accelerated to 1,000 times their rate before the existence of modern Homo sapiens. The World Wildlife Fund guesses 10,000 species could become extinct every year. Due to climate change, The Nature Conservancy suggests one fourth of Earth’s speciescould be on their way to extinction by 2050.

Inextricably tied to extinction, food chains are likely to become permanently unbalanced as apex predators and their prey begin to disappear. In the Arctic, for example, rising ocean temperatures are impacting the growth of sea algae, which in turn, deprives populations of zooplankton, cod, seals, and polar bears of vital nutrients. Over the last 50 years, average winter temperatures throughout Alaska and western Canada have risen by as much as 7°F.

In the near future, humans, among other species, will be catastrophically affected by sea level changes. As ancient glaciers begin to melt, and thermal expansion occurs, coastlines elsewhere will flood, and communities will become displaced. By 2100,approximately 13 million people in the US are projected to lose their homes due to rising sea levels. In some parts of the world, such as the Pacific Ocean, that’s already started to happen. Scientists theorize that even if we prevent global average temperatures from rising above 2°C, earlier sea level changes could be irreversible.

Considered a crucial barometer of environmental health, ocean acidity is already wiping out entire marine ecosystems. The planet’s oceans are constantly absorbing excess CO2, causing their pH to decrease, literally acidifying the water. And as water temperatures rise, vast expanses of life sustaining coral, such as Australia’s Great Barrier Reef, are also bleaching and dying. While coral polyps could still take hold and regrow into reefs, scientists anticipate that bleaching events will leave long-lasting marks on the face of ocean ecosystems.

Get six of our favorite Motherboard stories every day by signing up for our newsletter.

Corrections: This story originally stated that 13 million people are projected to lose their homes due to rising sea levels, and has been updated to say that number reflects US populations alone. It has also been altered to reflect that most scientists say the carbon levels at 400 parts per million are a “milestone,” not a “tipping point.” We also altered the language in the extinction paragraph to reflect that these are estimates from The Nature Conservancy. And we added that thermal expansion is another cause of sea level rise, and corrected the implication that ocean acidification was a cause of coral bleaching.