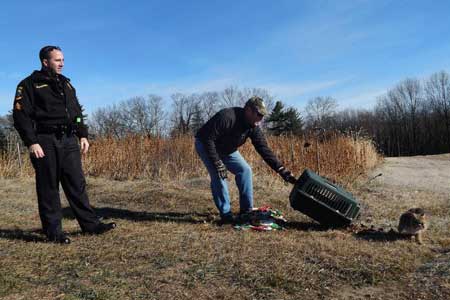 In an era where the stories come to light how police is ignoring their responsibilities and acting totally contrast to what they are supposed to (see these examples – CA Police Arrest innocent Man then shoot his Dog in Front of Him and Police threaten to arrest samantha shoot baby fawn we were trying to save and then impound my vehicle) these officers from Henniker shows how to take responsibility and to be compassionate at the same time.

Photo caption – Sgt. Matthew French and conservation officer Delayne Brown release a bobcat in Henniker on November 30, 2013. French hit the bobcat with his car while heading home from work earlier in November. He took the bobcat to Brown who then took it to Wings of Dawn wildlife rehabilitation in Henniker where it healed up.

Sgt. Matt French of the Henniker Police Department was heading home from work two weeks ago when he hit what he thought was a house cat. He doubled back and discovered the blur that ran under his truck tires was certainly a cat – just not someone’s pet. He had hit a bobcat.

Bobcats are the most common wildcats in North America, but in 1989, the state barred bobcat hunting and trapping out of concern for a declining local population. The number of bobcats in New Hampshire seems to be on the rise again, according to the Fish and Game Department, but hunting and trapping seasons remain closed.

French thought the animal was dead, he said, so he brought the bobcat to Conservation Officer Delayne Brown at Fish and Game. Brown realized the young male cat had only been knocked out, and he brought it to Maria Colby, who runs Wings of Dawn wildlife rehabilitation in Henniker.

This bobcat was just “a little tyke,” Colby said.

“He had a concussion . . . but everything else was fine,” Colby said. “For the first three or four days, he didn’t move around a lot. (Then) I could see he was playing a little bit with the things I left for him.”

After two weeks of recovery with feathers and string, the bobcat was ready to go back to its mother in the Henniker woods. French and Brown released the bobcat together Saturday, sending it back into the wild near where the sergeant hit it on Old West Hopkinton Road.

When they let it out of the carrier crate, French said the young cat only stuck around for a minute before it bolted toward the trees. “He didn’t want to hang out and chat,” French joked.

“You don’t see too often police officers and game officers doing wildlife rescue. . . . It was a great opportunity to show their kids that they were doing this wonderful thing for wildlife,” she said. “If it wasn’t for them, that bobcat would have been dead.”