His Holiness the Supreme Patriarch dies

The nation and the entire Buddhist community are mourning the loss of His Holiness the Supreme Patriarch, Somdet Phra Nyanasamvara Suvaddhana Mahathera, who died at Chulalongkorn Hospital Thursday evening. 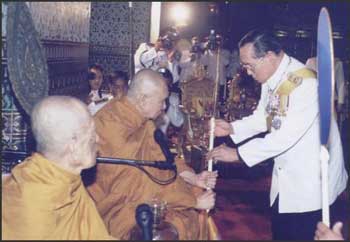 His Majesty the King has acknowledged the death of His Holiness with deep sorrow, the Royal Household Bureau said in a statement issued Thursday night. His Majesty instructed that the Supreme Patriarch’s body should lie in state at Phra Tamnak Petch at Wat Bowon Niwet in Bangkok and that palace officials must wear black for 15 days, starting Friday. 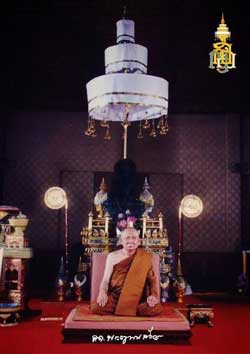 In the eighth announcement released at about 2pm Thursday, the hospital said the Supreme Patriarch’s overall condition had deteriorated, with his blood pressure dropping. His Holiness had been ill since Feb 20, 2002, when he was admitted to Chulalongkorn Hospital. He turned 100 on Oct 3.

The body of His Holiness will be moved from the hospital on Friday at noon to Wat Bowon Niwet. Mourners will be allowed to pay their respects and bid farewell to the revered monk both at the hospital and the temple. The government will announce flags will be flown at half-mast for three days beginning Friday, and there will be 15 days of mourning.

His Holiness, formally known as Charoen Gajavatra, was born in Kanchanaburi on Oct 3, 1913. He has two younger brothers. He was ordained as a novice at the age of 14 at Wat Devasangaram in his hometown and became a monk at Wat Bowon Niwet when he turned 20. At the age of 76, His Majesty the King approved the nomination of Phra Nyanasamvara on April 21, 1989, as the 19th Supreme Patriarch of the Rattanakosin Era.

In September last year, the World Fellowship of Buddhists bestowed the title of “Sangha Leader of the Buddhist World” on the Supreme Patriarch. Sangha leaders from 32 nations made the decision at a summit in Japan.

Somdet Phra Maha Ratchamangkhlachan, 87, the abbot of Wat Paknam Phasi Charoen, is currently serving as chairman of the monastic panel acting on behalf of the Supreme Patriarch.

Previous articleDogs Are People, Too
Next articleAT LAST! Ban on ALL wild animals in circuses is passed
Digital Media