How The Black Dot Campaign Grew Into A Dangerous Viral Hoax 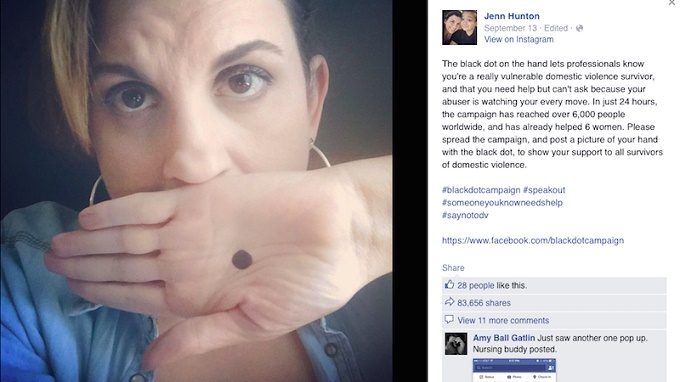 The problem with the internet is that it’s very easy to get publicity for a good idea (or a bad one) regardless of it actually existing. Such is the case of the Black Dot Campaign—an effort to identify domestic violence victims in need of help by having them draw small black dots on the center of their palms. While the campaign began as a well-intentioned attempt at starting conversations about abuse, it quickly grew into a dangerous viral campaign with a life of its own.

The earliest available mention of the campaign, which has spread rapidly via Facebook and Twitter, is a Facebook post from September 13, in which a woman named Jenn Hunton posted a picture of herself with a black dot on her hand. The post reads:

The black dot on the hand lets professionals know you’re a really vulnerable domestic violence survivor, and that you need help but can’t ask because your abuser is watching your every move. In just 24 hours, the campaign has reached over 6,000 people worldwide, and has already helped 6 women. Please spread the campaign, and post a picture of your hand with the black dot, to show your support to all survivors of domestic violence.

The post also links to the campaign’s Facebook page which has since beentaken down. As of Thursday morning, that post had been shared over 83,600 times, and the campaign had been featured positively in national pressincluding The Telegraph, Hello Giggles, The Huffington Post, and Marie Claire.

The Black Dot Campaign is to enable victims who can not ask for help verbally to ask for help with a simple black dot and people recognise this and help. This is a campaign to help the most vulnerable victims of Domestic Violence. They simply draw a black dot on their hands and agencies, family, friends, community centres, doctors, hospitals can recognise this person needs help but cannot ask for it.

Then on September 14, the campaign posted an “Important Notice,” essentially clarifying that nobody has been officially notified about the campaign, except for the internet:

The original ethos for this campaign was to enable a victim to put a dot on their hand around someone they trusted to enable a conversation to start, so they could open that door and hopefully start a process of seeking professional help. This is an idea, thinking outside of the box, trying to open up the worlds eyes and ears to what is going on in terms of abuse. The idea came from a former domestic violence victim. Professional bodies have not been advised or trained in the Black Dot, what it symbolises and what it means When people contact us we open the gates of communication and put them in touch with people who can really help Putting such a campaign on Facebook was about raising awareness on a social media platform This isn’t the solution that will help everyone, if anything it should help people realise what abuse is, how it affects people and how to access help. and most importantly SAFETY MUST ALWAYS COME FIRST. If you see a black dot or are approached by someone for help, if safe to do so take them to safety and get them in contact with the relevant agency. Intervention and support should only be done by professionals .

The idea is a good one—a subtle marker of domestic violence could help victims who are unable to speak up about their abuse because of constant surveillance or other fears. However, as the campaign took off, its purpose became obfuscated and re-appropriated. Today, the campaign has taken the form of a potentially dangerous scam: If a domestic violence perpetrator learned of the campaign and then saw the black dot, they might lash out in response. Additionally, the vast majority of “professionals” referred to in the viral post is likely unaware of the campaign and how to deal with a black dot should they see one. By the end of September, domestic violence prevention organization Project Sanctuary had officially announced its refusal to endorse the campaign:

“The Black Dot Campaign is a very well-meaning idea, but a bad idea nonetheless,” said Dina Polkinghorne, executive director of domestic violence prevention organization Project Sanctuary in a statement. “The campaign is getting a lot of attention, so abusers may also be aware of it. They might question why their partner would have the dot on their hand. A well-meaning family member could also see the dot, and inadvertently compound the violence.”

“When would it be appropriate to use it?” she continued. “At the grocery store? At the doctor’s office? Someone who was being completely controlled would be told by the abuser that they want to be in the exam room, so the victim would not be able to tell their doctor that they were in a domestic violence situation.”

In an interview with a local ABC affiliate, Peninsula Mental Health Services’ Dr. Michael Finegan agreed: “The factor [for the campaign’s seeming disintegration] was that the abuser, highly controlling, would see the black dot and that that would facilitate more violence or more abuse.”

The founder, who is a British domestic abuse survivor who wishes to remain anonymous, told the BBC that she never meant for the campaign to go viral, or for women to post selfies with black dots on their hands.

“When things go viral and worldwide, you kind of lose control. A lot of survivors are putting their dots on their hand, but that’s not what the original idea was,” she said. “I imagined it as a tool to start face-to-face conversations between friends or with professionals. I was basing it on my experiences and I was thinking, how could I prompt people to talk about domestic violence?”

She also noted that if it seemed unsafe, she trusted domestic violence victims not to draw the dot: “Just because you’re a victim doesn’t mean you’re stupid — you know yourself what is safe and what is not safe.”

However, despite professionals speaking out against the campaign and the campaign’s page disappearing from the internet, it has still managed to continue to spread well into October with no signs of slowing.

I will tweet this daily for my wife’s 20 yrs of suffering #blackdotcampaign pic.twitter.com/qu1gQtXS3Q