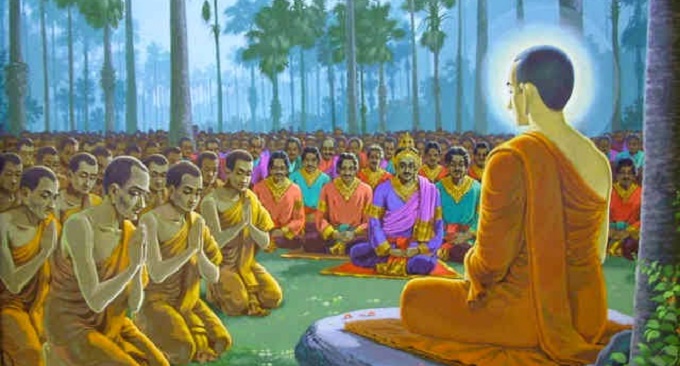 One will never reach the destination if one just looks at the map, enjoys its fine printing, but never determines the direction that leads to the destination; or after finding out which direction to go, never lets the car start moving. Buddha is a teacher. He uses His finger to point out the moon to us. But if one just looks at Buddha’s finger, one cannot see the moon. The finger serves simply to point us in the right direction. Once one follows that direction and sees the moon, the finger should be forgotten.

The most suitable way to pay tribute to the Fully-awakened One is to strive to realise his noble teachings and to put those teachings into practice. His noble message for the suffering humanity is an eye-opener and our prime duty should be to work with total dedication to achieve the wholesome results by following the path as shown by the Buddha to us summoning all our courage and might. It is natural that there may be a lot of obstacles and hindrances for us to undergo while we are treading on the path.

Our friends will sometimes laugh and ridicule at us saying that we are lunatics. But we should have complete confidence in ourselves and unshaken faith in Triple Gem if we are to achieve success at the end.

The truth that the Buddha realised is universal. In Buddhist terminology, it is known as Dharma, or Dhamma in Pali. The realisation of the Dharma was the result of a long and arduous spiritual quest. The Buddha attained supreme enlightenment through his own efforts, without any help from a teacher. His knowledge was full and complete, ultimate and perfect in all respect.

Buddhism teaches man to depend on himself, to be courageous and confident in his own ability. Buddhist philosophy places man at the centre of all things, it advises man to strive and work hard to achieve his goals, material or spiritual, through his own efforts, not through prayer or mere wishful thinking.

Because Buddhism is a religion of self-help, it is suitable for the strong-minded. Since it encourages free thinking, it enjoys a special place in the hearts of modern free thinkers.

As its teachings are scientific, it is highly respected by the intellectuals. The Buddhist emphasis on peace and loving-kindness makes

the religion appealing to peace loving men the world over.

The teachings of the Buddha that we find in printed books or magazines can serve only as a road map does for an automobile driver. One has to study the map, digest the information therein, and above all, start the engine and go.

One will never reach the destination if one just looks at the map, enjoys its fine printing, but never determines the direction that leads to the destination; or after finding out which direction to go, never lets the car start moving. Buddha is a teacher. He uses His finger to point out the moon to us. But if one just looks at Buddha’s finger, one cannot see the moon. The finger serves simply to point us in the right direction. Once one follows that direction and sees the moon, the finger should be forgotten.

A nice prayer is given below for you to recite everyday early in the morning.

”May we reaffirm the determination of our ancestors; we shall strive to sail across the vast ocean of hatred, discrimination, selfishness; and arrive on the other shore of loving-kindness, compassion, joy, and equanimity.

May we reaffirm our determination to extend our love of brotherhood to all people on earth and may we be guided by the collective wisdom of all world religions to save ourselves from self-destruction. Today our greatest fear is not of nature. Our greatest fear is of ourselves”.

We should constantly ponder over the following meaningful utterances by the Buddha.

“We human beings can send ourselves to the moon, but we still cannot eliminate the horrors of concentration camp or the need for prisons.

We spend billions and billions of dollars to eliminate the diseases that kill us, but we pay little attention to routing out the motivations that cause us to kill each other.”

These are words that a very reputed scholar of Buddhism spoke addressing a large gathering of American Buddhist devotees in America.

For thousands of years, we human beings have been unable to liberate ourselves from fear! Why?. Because we cannot rid ourselves of hatred, discrimination, selfishness and desire. But why can we not eliminate these evils that almost everyone knows are destructive? The answer is that we human beings have such a great desire to possess.

The desire for possession creates attachment. Basically, attachment is due to the concepts of self and possession as when we say,” This is mine”.

This concept of self is strengthened by the belief that both “I” and the ‘world” are real; not only real but also permanent, although we know that is wishful thinking. Surely we realise that no one can live forever and that no one carries money, power or beauty with him or her at death.

Therefore, to recognise that all phenomena and ideas of the world are unreal like a dream , and impermanent like lightning, is to cause desire and the concept of ego to diminish. When ego is subdued, hatred, discrimination, selfishness, and desire are also diminished.