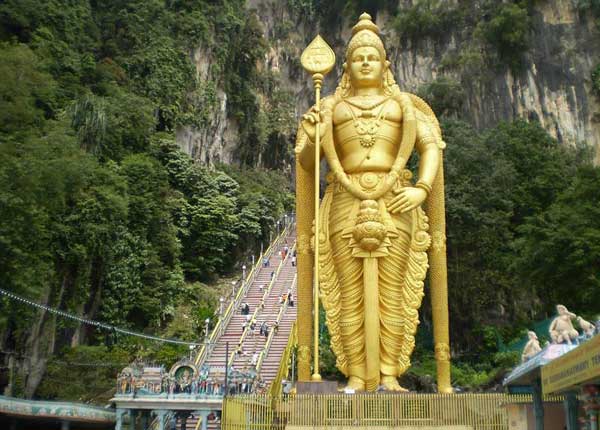 April 16 — KUALA LUMPUR: It’s just a few weeks ago, Malaysia issued an order prohibiting the use of word “Allah” by followers other than Islamic faith. It was widely discussed as a sign of moderate Malaysia becoming somewhat extreme with such myopic legislations. Now the “huge” statues at a Hindu temple in Batu Caves and Buddhist temple in Penang are an affront to Islam as the religion forbids idolatry, a retired Court of Appeals judge said.

Datuk Mohd Noor Abdullah stressed that such sculptures of non-Muslim deities should not be built in the open, but should be placed within an enclosed building instead.

“With such a huge statue, you’re showing that your religion is all mighty and powerful,” Mohd Noor told The Malay Mail Online and Bernama in an joint interview yesterday, referring to the 42.7-metre high statue of Lord Murugan, the Hindu warrior god, at Batu Caves in Selangor.

Pointing to the Federal Constitution which states that Islam is the religion of the federation, the former judge insisted Islam is above other faiths.

“When non-Muslims build such big idols, it hurts people’s feelings,” he said.He added that non-Muslims had freedom of worship, but that such freedom must be exercised in a way where “Muslims don’t feel threatened”.

The retired judge also criticised the 30.2-metre high statue of Kuan Yin, the Goddess of Mercy, at a Buddhist temple at Air Itam, Penang.

“Islam forbids images (of gods). Here, you allow images of Buddha in the country. That’s not consistent with Islam. But if you cover it up, you can allow it,” Mohd Noor said.

Mohd Noor also called for Malaysians to set aside their racial identity and to simply think of themselves as Malaysians, in order to foster national integration.

“The constitution does not divide the community to Malays, Chinese, Indians and others. In the Federal Constitution, Malaysia is composed of the Orang Asli, natives, and non-native community,” he said.

He noted that the constitution defines natives as the Malays from the peninsula and the Bumiputera in Sabah and Sarawak.

“Malays now are inclusive Malays, not exclusive,” he said.

Mohd Noor said that based on the Federal Constitution’s definition of a Malay — who is defined as a Muslim who speaks the Malay language and conforms to Malay customs — Malaysians who convert to Islam should be considered Malay.

“Why should the Malays be jealous and reject them as Malays? People tell me that if Muslim converts are considered Malay, we’re selling off Malay rights to the Chinese and Indians. But Islam says that you should share and share alike with Muslims,” he said.

Mohd Noor also called for the abolition of vernacular schools and said that Mandarin and Tamil could be taught at national schools instead.

“We can make English, Malay and Mandarin compulsory in national-type schools,” he said, noting that Mandarin has grown to be an international language.

He added that Putrajaya should allocate more funds to develop the Orang Asli and native communities in Sabah and Sarawak, and also urged the Malays to “work hard like the Chinese”.

Mohd Noor first stirred controversy last year when he reportedly warned the Chinese of a Malay backlash for purportedly betraying the Barisan Nasional at the May 5 general election, which saw the ruling coalition’s worst-ever electoral performance.