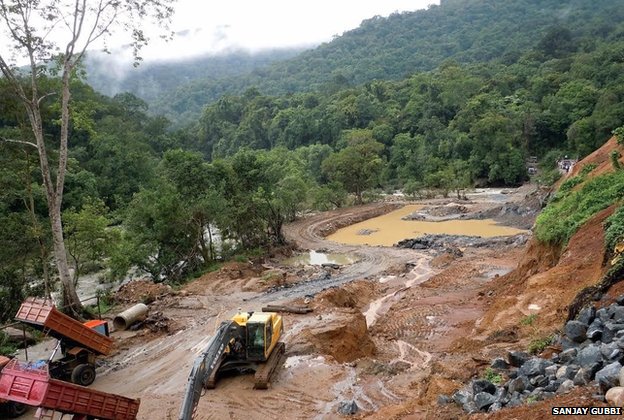 A landmark effort by the Indian state of Karnataka to connect isolated protected forests could lead to the building of Asia’s largest unbroken forest, writes Jay Mazoomdaar.

It’s been all about connecting the green dots.

Since 2012, the southern state of Karnataka has declared nearly 2,600 sq km (1,000 sq miles) of forests as protected areas, linking a series of national parks, tiger reserves and sanctuaries.

Karnataka has already built three unbroken forest landscapes spread over more than one million hectares along the Western Ghats, a mountain range that runs along the western coast of India. It is also a Unesco World Heritage site and one of the eight hottest biological hotspots of the world.

In southern Karnataka, the missing links in the Bannerghatta-Nagarhole landscape have been bridged to achieve an unbroken stretch of 7,050 sq km that includes adjoining protected areas in the neighbouring states of Tamil Nadu and Kerala.

In central Karnataka, the Kudremukh-Aghanashini landscape across 1,716 sq km has been made contiguous.

In the north, expanding the Anshi-Bhimghad landscape has linked a forest stretch of 2,242 sq km in Goa and Karnataka.

Interconnected forests also offer a better chance of adaptation and survival when wild animals shift habitats to cope with the impact of climate change.

None of these concerns has stopped the Indian government from dragging its feet over implementing the recommendations of an expert panel to safeguard the Western Ghats.

But Karnataka has on its own secured much of this biological treasure trove.

But it has not been easy.

Given the exclusionist conservation model of the Indian state, local communities usually fear losing their traditional rights when a forest is brought under legal protection.

But the state forest department officials say they have been treading cautiously.

From the beginning, explains former forest official BK Singh who initiated the expansion process, it was made clear that all existing rights of the people would continue.

“The protected area expansion covered only reserve forests where people’s rights were already settled. Even in those areas, we did not force our decisions on people,” says Vinay Luthra, Principal Chief Conservator of Forests, Karnataka.

“We have not relocated a single village for this expansion,” says MH Swaminath, former wildlife official who was part of the team that drew up the plan in 2011, adding that the focus was on protecting biodiversity-rich forests and key wildlife corridors from invasive development such as heavy industries, mining or dams.

“In comparison, existing villages [within the expanded protected areas] do not pose any serious threat to conservation,” says Mr Singh.

The expansion plan was accepted by the Karnataka state wildlife officials in July 2011. By January 2012, it had the approval of the National Board for Wildlife in Delhi. Within a month, the first expansion was implemented in the Bandipur tiger reserve.

“Since then, nearly 1,700 sq km was added to three national parks and five wildlife sanctuaries. Another 906 sq km was notified as a new sanctuary,” says wildlife biologist Sanjay Gubbi.

Besides supporting wildlife, these expanded protected areas also serve as watersheds and support 15 rivers, he adds.

“Certain vested interests tried to mislead people. A lot of ground has been covered in just two years but a few key links still remain to be achieved to establish forest connectivity between Bangalore and Goa,” says Mr Singh.

A spate of small hydel power projects, for example, threatened to block the elephant corridors and spoil the natural water systems in and around Pushpagiri wildlife sanctuary.

In April 2013, the Karnataka government informed the High Court that no new mini-hydel project would be permitted in the Western Ghats region and also set an example by cancelling the land leases granted to two ongoing projects.

Yet, an unbroken Bangalore-Goa landscape may remain just a dream.

There are only two small conservation reserves – Aghanashini (known for the lion-tailed macaque) and Bedthi – in a sea of human settlements and areca nut plantations between the northern and central Karnataka landscapes (see map).

“But it is possible to link the southern and the central Karnataka forest landscapes into a contiguous protected area spread over 15,000 sq km in Karnataka, Tamil Nadu and Kerala,” says Mr Gubbi.

“That in itself will probably be Asia’s largest unbroken protected area network.”