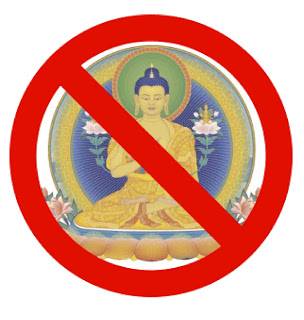 Authorities are confiscating Buddha statues from shops in the Iranian capital, Tehran, to stop the promotion of Buddhism in the country, according to a report Sunday in the independent Arman daily.

Iran has long fought against items, such as Barbie toys, to defuse Western influence, but this appears to be the first time that Iranian authorities are showing an opposition to symbols from the East.

The newspaper quoted Saeed Jaberi Ansari, an official for the protection of Iran’s cultural heritage, as calling the Buddha statues symbols of “cultural invasion.” He said authorities will not permit a specific belief to be promoted through such items. Ansari did not say how many Buddhas had been seized, but that the “cleansing” would continue.

Some Iranians buy Buddha’s statues to decorate their homes and cars. Most are made in China and come from Iranian free-trade zones in the Persian Gulf.

“As I understand, none of customers cared about Buddhism, they only bought it for decoration,” said Reza Sanaei, a shopkeeper who sells the statues.

A customer, Marjan Arbabi, said she personally did not like the statues. “But my parents have set of five Buddah’s statues at their home simply because they think the statues are beautiful,” she said.

Under the constitution, Christian and Jewish beliefs as well as Zoroastrianism are recognized beside Islam, the official religion of the country. The law, however, says that, in general, the rights of all non-Muslims should be observed.

Some Islamists do not support production of any statue, since they view it as a way to promote idols.

In 2010, several statues depicted prominent Iranians, disappeared from Tehran city’s streets and squares. Their disappearance was blamed on an unnamed group with a strict interpretation of Islam that bans the depiction of the human form in art.

Previous article10 Psychological Studies That Will Change What You Think You Know About Yourself
Next articleNatasha, ‘Genius Chimp,’ Aces Intelligence Tests
Digital Media