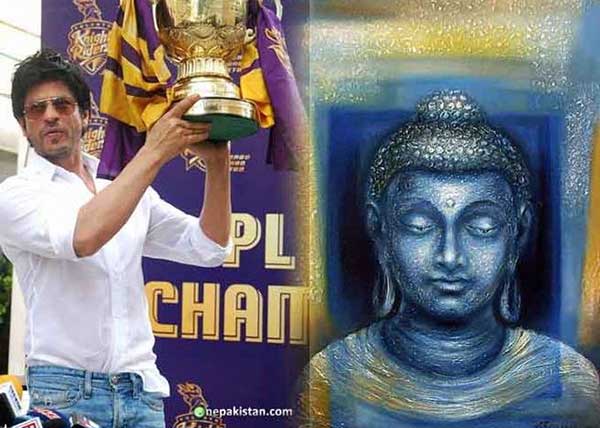 India’s most famous man and Asia’s biggest star, the KKR franchise owner whose team won the most recent edition of the Indian Premier League (IPL), superstar Shah Rukh Khan is looking for some peace and solitude. He has turned to books on Gautam Buddha’s life to “calm down”.

The 48 year old is in the film industry well over two decades now and has been India’s most influential man during his filming career for many years. He not only grabbed numerous Filmfare awards but also did so consecutively for many years. He was also a winner of doezens of international movie awards during his career.

His concerts, appearances anywhere in the world made news and public gathering wherever he appears is a usual sight. His movies are world famous with views exceeding some of the greatest Hollywood hits.

“Overwhelmed at how much love I receive. Makes me want to give my all in the service of making people smile. Hope I have enough to give for long,” he posted on Twitter following the ceremony.

On a twitter message few days ago he mentioned that he got a few bookson Gauthama Buddha and he is excited to read them all and believed that it can bring him peace and happiness. Those who are close to his circle points out that he is inspired by Buddha and believed that Buddha’s teaching could possibly change the life’s of people towards the better and bring them peace.

Previous articleA Woman Photographs a Baby Seal and Gets a Huge Surprise
Next articleCurfew enforced to quell unrest between Muslims and Buddhists in Sri Lanka.
Digital Media