Isn’t it a pathetic US law? Treating homeless could be a crime 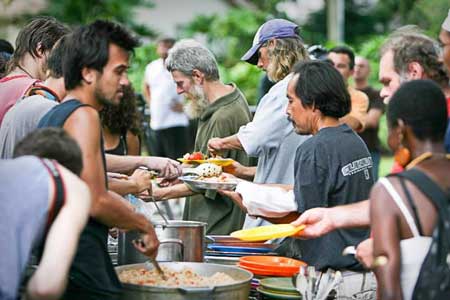 It is disgraceful to treat homelessness as a crime. Are we addressing the problem or running away from the problem? Ignoring the problem and trying to show up homeless as a problem to the society is definitely an evil propaganda campaign by extreme right wing parties including such media.

There are many cases that US follow around the world to tackle this issue instead of introducing laws that discriminate a section of people. Here is what Toronto Is doing to address the problem of poverty and feeding the homeless, it’s a nonprofit organization with community involvement called Food Share. They have different facets, community gardens, education and support. Similarly such examples could be found from various cities around the world.

The gift the American Thanksgiving gave the homeless was just fabulous. What a pity way to tackle a problem in hand.  In a few talk shows recently some ha to say this with a nice voice and a convincing tone, “Don’t give money to homeless, you’re making them rich” and” all homeless are scammers”. What a lie! It’s disgusting! Scammer right wing media calling homeless are scammers.  Shows how much of propaganda work is behind these talk shows.

What this law ultimately will bring is that the lack of access for the people to supply food for the homeless. If the concern is the crime rate robbery etc, How could people ask homeless to come to their homes for food? Or is the city council willing to provide a facility where homeless can be fed easily. After all, safety of the parks cannot be of greater importance to the hungriness of a fellow human.

Check out the story below as published by scott.net.

Actor Alexander Polinsky is one Los Angeles resident who complained about the number of homeless people crowding his neighborhood.

“If you give out free food on the street with no other services to deal with the collateral damage, you get hundreds of people beginning to squat,” Polinsky told The New York Times. “They are living in my bushes and they are living in my next door neighbor’s crawl spaces. We have a neighborhood which now seems like a mental ward.”

“This has overwhelmed what is a residential neighborhood,” Council member LaBonge said. “When dinner is served, everybody comes and it’s kind of a free-for-all.” But advocates for the homeless say public officials are attempting to legislate the poor into invisibility instead of helping those in need.

“It’s a common but misguided tactic to drive homeless people out of downtown areas,” Jerry Jones, the executive director of the National Coalition of the Homeless, said to The New York Times.

“This is an attempt to make difficult problems disappear,” said Jones. “It’s both callous and ineffective.”

While homelessness in the U.S. has dropped for the fourth straight year, falling 4% in the past year, some cities, including Los Angeles, have seen a spike in homelessness. Los Angeles would join “dozens of cities in recent years” including Philadelphia, Raleigh, N.C., and Orlando, Fla. that have either enacted or at least debated legislation aimed at regulating the public feeding of the homeless. Over 50 cities have previously adopted some kind of anti-camping or anti-food-sharing laws, according to the National Law Center on Homelessness & Poverty.

In March of 2011, Philadelphia Mayor Michael Nutter announced the ban on serving food in public parks, he said moving such services indoors was part of an effort to raise standards for the homeless. The ban was temporarily blocked by a federal court in July 2012 after homeless advocacy groups sued the city.  “It hardly needs to be said that plaintiffs’ food-sharing programs benefit the public interest,” Federal Judge William Yohn Jr. wrote in his opinion. “Despite [the city’s] considerable efforts, many Philadelphians remain homeless and hungry.”

In Orlando, Fla. a federal appeals court unanimously ruled in 2011 that the city can restrict the feeding of the homeless in order to protect the parks. A spokesperson for the city said that residents and business owners originally complained about trash left after the food distribution, public urination and concerns about crime.

The court decision states, “The City of Orlando enacted the ordinance to spread the burden that feedings of large groups have on parks and their surrounding neighborhoods.” City officials were then allowed to enforce an ordinance restricting weekly feeding of the homeless in downtown parks.

Previous articleBeyoncé and Jay Z Are Going Vegan : “It Just Feels Right,” Rapper Says of Their New Diet
Next articleMan Trapped in the bottom of Atlantic Rescued after 3 Days
Digital Media