It was shocking when Japanese prime Ministers responded global outrage over Dolphin killing by saying “Killing Dolphins at Taiji Cove is an ancient tradition and I hope that people respect that”. Is there anything to respect in this entire act? Read below article originally appeared on huff post that has most of what you need to know.

It’s Friday in Taiji and another pod of dolphins has been driven into the killing cove. It was just last weekend that the world watched in shock as over 200 dolphins awaited their fate there. Representatives from marine parks and swim-with-dolphins programs selected 52 dolphins for display, the first being an albino calf, estimated to be worth half a million dollars. After four awful days, on Tuesday morning, the killing began. Forty-one dolphins were butchered, their family members bathed in their blood. Then those deemed neither pretty enough for the entertainment industry nor weighty enough to be included in the quota for meat were driven back to sea. Many, especially the young who had lost their guardians, were not expected to survive the trauma. 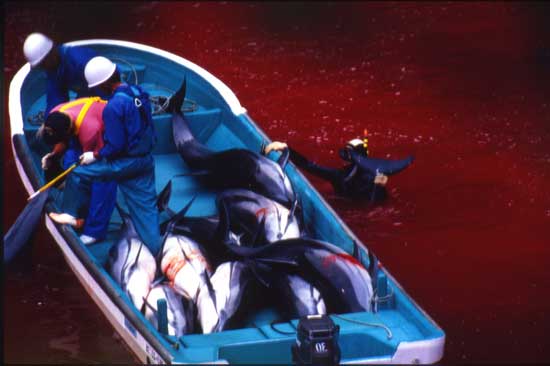 The official response from Japanese officials referred to the country’s “tradition.” But the current series of hunts began in 1969, making them less traditional than the Rolling Stones.

Japanese officials added that the slaughter is no different from that of other animals for food that may appeal more to Western tastes. But it seems that the butchery for food, like the cloak of tradition, hides a less palatable truth. Live dolphins sold locally bring many tens of thousands of dollars each. Sold internationally, they can each command over $100,000. So a conservative estimate of the hunters’ earnings on the 52 dolphins sold into captivity might be $3 million. Dolphins slaughtered for meat bring a few hundred dollars per head, so the 41 dolphins slaughtered on Tuesday would have earned their killers less than $20,000 total, a comparative tidbit.

The New York Times has reported that dolphin meat “is hardly a vital food source: only a minority of Japanese eat whale, and dolphin is even less common….” That article also shared the results of tests of dolphin meat that “found mercury levels ranging from 10 to 100 parts per million, far above the Japanese government’s advisory level of 0.4 parts per million.”

Thus the dolphin hunters aren’t feeding the Japanese people; they are poisoning them. But the slaughter makes it possible for the governor of Wakayama prefecture, where Taiji’s infamous cove is located, to hide behind the comparison to cows and pigs, saying, “I don’t think it is logical to say that it is only cruel to eat dolphin meat.”

To be fair, given the treatment of animals being used for food in the U.S., Caroline Kennedy’s accusation of Japanese “inhumaneness,” a concern expressed on behalf of the United States government, is dodgy. Here in the U.S. the almost lifelong housing of intelligent sows in coffin-sized gestation crates is not only legal but the norm. And while federal humane slaughter laws attempt to protect animals from painful deaths, they have gaping loopholes, and the majority of animals killed for food, birds, are exempt. But Japan’s dolphin slaughter may be in a cruelty class of its own. Driven into the cove, the dolphins are trapped there for days with no food, then killed via rods driven into their heads and backs.Sea Shepherd‘s Melissa Sehgal, currently at the cove, told Reuters, “It takes up to 20 to 30 minutes for these dolphins to die, where they bleed out, suffocate or drown in the process of being dragged to the butcher house.”

Regardless of the validity of the comparison, here’s what differentiates the suffering of the dolphins from that of pigs: We can do something now about the dolphins. Talking with HLN’s Jane Velez-Mitchell about the worldwide media attention and pressure on the Japanese government, Ric O Barry, the dolphin hero featured in the Oscar-winning documentary The Cove, said, “We have some momentum here. We have a chance to stop this.”

Many of us care deeply about the suffering of pigs and long for the day when video of atrocities against them stirs up mass outrage. But when a building is burning, we don’t ignore the cries of the people on the lower floors because we can’t get to those above them. When hijackers offer to free women and children, we don’t refuse them because it’s unfair to leave the men behind. We don’t withhold aid from Haiti’s earthquake victims because there are homeless children in the United States. And we cannot tell the dolphins that we’d love to save them but it just wouldn’t be fair to the pigs.

Ric O’Barry posted the number of the Japanese embassy; the least I felt I could do was call. I was put through to voicemail, in the fisheries department, where I expressed my opposition to the hunt and my fear that the dolphin slaughter was damaging the reputation of Japan. As Japan courts tourists for its 2020 Olympics, that message is likely to have an impact.

As both the British ambassador to Japan and the Australian Environment Minister have also publicly condemned the hunt, I add here the numbers for the Japanese embassies in London and Sydney:

Please call. You need not worry that the ambassador himself, or any of his staff, will get on the line and argue with you about the cows and pigs. You’ll be put through to voicemail, where you can leave a polite, one-line message. But first somebody will have to answer the phone, which means your call is an inconvenience to the embassy — far greater than your signature on a petition — and many calls will be a blessed nuisance.

Remember Lily Tomlin’s wonderful words: “I said somebody should do something. Then I realized I am somebody.”

We can all be somebody for the dolphins; we can be their voice. Let’s use our voices to amplify their cries until the killing ends. Please don’t just sit there in sorrow. Pick up your phone.