Karma – the law of cause and effect

BUDDHISM: Every cause has an effect and in the language of science, karma is called the law of cause and effect. 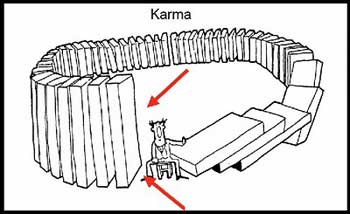 The Buddha in standing posture Madavacciya, Anuradhapura According to Dhammpada, the mind is the chief (forerunner) of all good and bad states. If you speak or act with a bad mind, unhappiness will follow you just as the wheel that follows the hoof of the ox. Similarly if you speak or act with a good mind, happiness too will follow you like the shadow that never leaves you.

A person moves mentally or physically. His or her motion is action. The repetition of actions is habit and thus habit becomes one’s character. Karma is simply action and in Buddhism, this process is called karma.

“Karma is volition,” says the Buddha, meaning both good and bad mental action. It is not an entity, but a process of action, energy and force. It is our own doings reacting on ourselves. A person experiences pain and happiness as results of his or her own deeds, words and thoughts reacting on themselves. Our own deeds, words and thoughts produce our propensity and failure, happiness and misery.

Since there is no hidden mediator directing or administering rewards and punishments, Buddhists should not rely on prayer to some supernatural forces to influence karmic results. The Buddha admonished that karma is neither predestination nor determinism imposed on us by some mysterious, unknown powers or forces to which we must in vain offer ourselves.

Thus we would merely be the slaves of our past. Similarly if everything is undetermined, then there can be no cultivation or moral and spiritual growth. The Buddha admonished to understand karma as neither strick determinism nor absolute indeterminism, but an interaction of both. This is the truth of the Middle Path.

There are misinterpretations in relation to karma and they are explained in Anguttara Nikaya. The wise should investigate and abandon them. They are:

1. The belief that everything is a result of acts in previous lives;

2. The belief that everything is the result of what is willed by a Supreme Creator.

3. The belief that everything arises without reason or cause.

If a person possesses an evil character and if his or her actions are due to past actions or caused by a Supreme Being or happened by mere chance, then he or she could not be held responsible for his or her evil actions as everything was predetermined.

There is also misconception that karma operates only for certain people according to their faiths. However the destiny of a person in the next life does not in the least depend on what particular religion he or she chooses.

Whatever religion one may practise, the fate depends entirely on the deeds, speech and thoughts that one commits. It does not matter what religious label that one holds, if one does good deeds he is bound to be in a happy world in the next life as long as one does good deeds and leads an unblemished life. One is bound to be born to lead a wretched life if one commits evil and holds evil thoughts in the mind. Karmic thoughts alone determine a person’s destiny, both in this life and in the next.

Karma explains the inequalities that exist among mankind. They are due not only to heredity, environment and nature. But the karma alone brings the results of our own actions. It is responsible for the success and the failure of our lives.

We cannot see karma in action without physical eyes as it is an invisible force. The results of karma are stored in the subconscious mind in a manner that leaves, flowers; fruits are stored in its seed.

The fruits of karma under favour conditions will produce just as with moisture and light where the leaves and trunk of a tree will sprout from its tiny seeds. Karmic energy also creates the effect, just as the taste of the fruits is carried forward.

A person leading a virtuous, charitable and benevolent character in the present life is similar to an account holding ‘good karma’. The accumulated good karma stored in account will ensure a trouble free life. However, the person must add good deeds to replace the good deeds that are being taken off.

Therefore, one cannot blame others or the fate for one’s miserable state. As such a good Buddhist must confront life as it is and not run away from it. It is with vigorous activity for good that one can own happiness.

The Buddha admonished that there is no place to hide to escape from karmic results. Buddhism explains that we have every opportunity to mould our own karma, thus influencing the direction of our lives. However we are not complete prisoners of our own actions. Nor we are slaves to our karma. We are not mere products of nature either.

We have the strength and the ability to change our karma as our minds are mightier than karma. To surrender ourselves to our own karmic forces, we should not give up our hopes and efforts.

We have to do more meritorious deeds and purify our minds than relying on worshipping, performing rites or torturing our physical bodies to overcome our karmic efforts. By leading a noble life and acting wisely alone that a person can overcome effect or his or her evil deeds.

Each and every action carried out without any purposeful intention cannot become a kusala karma or akusala karma. As they may not be strong enough to be carried forward to our next life. Ignorance of the nature of the good and the bad effect of the karma is not an excuse to justify or avoid the karmic results, if they were committed intentionally.

Buddhism does not ignore the role played by other forces of nature. Buddhism teaches that there are five orders or processes of natural law (niyama) which operate in the physical and mental worlds;

1. Utu niyama relating to the physical inorganic order such as winds and rains etc.

2. Bija niyama relating to the order of germs and seeds.

3. Karma niyama relating to moral causation or the order and result.

5. Citta niyama which governs the processes of consciousness.

As such karma is considered only as one of the five natural laws that account for the diversity in this world. Both beneficent and malevolent forces act to counter and to support karma. A favourable birth or an unfavourable birth can develop or hinder the fruition of karma.

Good appearance and poor appearance are two other factors that hinder or favour the working of karma. Time and occasion are other factors that influence the working of karma. In such situations the unfavourable conditions open up possibilities for evil karma to operate. The favourable conditions, on the other hand, will prevent the operation of bad karma.

Without effort, both worldly and spiritual progress is impossible. Therefore, effort or intelligence is the most important of all the factors that affect the working of karma.

Birth, beauty and ugliness, time and personal effort or intelligence therefore aid or obstruct the working of karma. However, people can overcome immediate karmic effects to a certain extent by adopting several methods.

Also certain other karmic effects follow the doers as long as they remain in this wheel of existence until they attain Nirvana. Owing to mental impulsion (Javana Citta) this difference is due as at the time when a thought arises in the mind to do good or bad.

Those who violate the karmic law will have to face the consequences irrespective of their religious beliefs. It is unbiased towards each and every person whether they believe it or not or which religion that they belong to. Karma is not the exclusive property of Buddhism. It is not stored up anywhere in the universe, but comes into being under certain conditions.

Karma is classified according to the time in which effects are worked out, functions, the priority of effect and the place in which the karmic effects transpire. Dittha Dhamma Vedaniya Kamma is called “Immediately Effective and if they do not operate in this life, they become “Ineffective or Ahosi”. Upapajja Vedaniya Karma is called “Subsequently Effective” and they too become ineffective if they do not operate in the second birth.

Aparapariya Vedaniya Karma is called “Indefinitely Effective” and those actions may produce their effects in any life in the course of one’s wondering in Samsara. Every birth is conditioned by past good and bad karma that predominates at the moment of death. The karma that conditions the future birth is called “Reproductive – Janaka Karma”.

Asanna Karma is the karma which one does immediately before the dying moment. In the absence of a Weighty Karma, this Karma will condition the next birth. Acinna Karma or Habitual is the next in priority of effect. It is the Karma that one habitually performs and recollects and for which one has a great liking.

Katatta Karma or the “Cumulative” embraces all that cannot be included in the above three. Buddhism does not assert that everything is due to Karma, although it attributes the inequality of mankind as one of the chief effects amongst many people.

Whatever good and bad deeds people commit within this life time, they will definitely experience the reaction within this life of hereafter. It is impossible to escape from their results simply by praying, but only by cultivating the mind and leading a noble life. However, it is not to believe that everything that we suffer or enjoy today is completely controlled by our past actions which we call Karma.

While our lives were conditioned in the past, it is entirely within ourselves to change that condition and to create our future and present well-being. If each present moment is carefully controlled, the future well-being is assured.

By Manjari Peiris to Mihinthalaawa by Lakehouse

Previous articleAT LAST! Ban on ALL wild animals in circuses is passed
Next articleMedia Is Destroying Your Self-Confidence
Digital Media