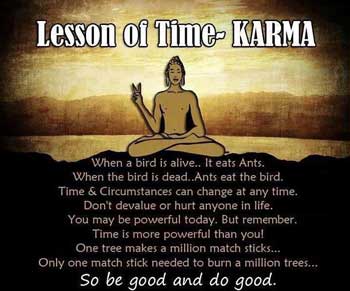 According to Buddhism, there are five orders or processes (Niyamas) which operate in the physical and mental realms:

3. Bija Niyama – Order of germs or seeds (physical organic order);
e.g., rice produced from rice-seed, sugary taste from sugar cane or honey etc. The scientific theory of cells and genes and the physical similarity of twins may be ascribed to this order.

5. Dhamma Niyama – Order of the norm,
e.g., the natural phenomena occurring at the advent of a Bodhisatta in his last birth, gravitation, etc.

Every mental or physical phenomenon could be explained by these all-embracing five orders or processes which are laws in themselves. 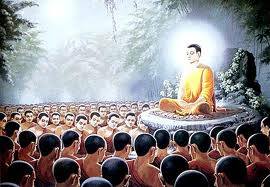 Kamma is, therefore, only one of the five orders that prevail in the universe. It is a law in itself, but it does not thereby follow that there should be a law-giver. Ordinary laws of nature, like gravitation, need no law-giver. It operates in its own field without the intervention of an external independent ruling agency.

Nobody, for instance, has decreed that fire should burn. Nobody has commanded that water should seek its own level. No scientist has ordered that water should consist of H2O, and that coldness should be one of its properties. These are their intrinsic characteristics. Kamma is neither fate nor predestination imposed upon us by some mysterious unknown power to which we must helplessly submit ourselves. It is one’s own doing reacting on oneself, and so one has the possibility to divert the course of Kamma to some extent. How far one diverts it depends on oneself.

It must also be said that such phraseology as rewards and punishments should not be allowed to enter into discussions concerning the problem of Kamma. For Buddhism does not recognize an Almighty Being who rules His subjects and rewards and punishes them accordingly. Buddhists, on the contrary, believe that sorrow and happiness one experiences are the natural outcome of one’s own good and bad actions. It should be stated that Kamma has both the continuative and the retributive principle.

A Buddhist who is fully convinced of the doctrine of Kamma does not pray to another to be saved but confidently relies on himself for his purification because it teaches individual responsibility.

It is this doctrine of Kamma that gives him consolation, hope, self reliance and moral courage. It is this belief in Kamma “that validates his effort, kindles his enthusiasm,” makes him ever kind, tolerant and considerate. It is also this firm belief in Kamma that prompts him to refrain from evil, do good and be good without being frightened of any punishment or tempted by any reward.

It is this doctrine of Kamma that can explain the problem of suffering, the mystery of so-called fate or predestination of other religions, and above all the inequality of mankind.