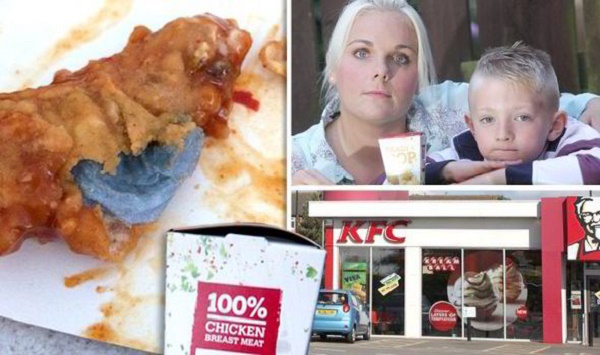 We reported a similar incident in March this year where KFC Sri Lanka serving a customer a FRIED WORM. Read ”

For which the restaurant apologized at the point and later rejected claims when inquired in to the incident by the Consumer Affairs Authority of Sri Lanka despite putting up an official response on their official Facebook page accepting the incident occurred.  Here’s a yet another KFC Style dish served to a UK Customer.

A mother in Newcastle, England was horrified when her stepson bit into a deep-fried blue paper towel, the Mirror reported last week.
Krystal Henderson, 29, and 7-year-old Oliver Hallam purchased takeout from a KFC branch in Killingsworth, according to the Express. At home, Oliver took a bite out of what he assumed was chicken, but recoiled seconds later.

“He pulled it out of his mouth and when he did, it pulled away the batter – you could see the blue roll inside,” Henderson said, according to the Daily Mail.

Henderson said that realizing Oliver had bitten into a paper towel was worse than if it had just been bad chicken.

“If it was bad chicken they might have just had a bad batch or something,” she said. “But the blue roll could have been used for anything – it could have bleach or disinfectant on it … Had someone wiped their hands on it, had it been used to wipe the floor?”

KFC investigated the incident and, in May, sent Henderson an apology letter, explaining
“the blue tissue has most likely originated from a tissue roll used for KFC hygiene purposes. The store assume it must have fallen unseen into the breading lug that is under the sieve and was not noticed by the cook.”

A spokesperson for KFC made the following statement, obtained by the Mirror:

“We’re very sorry for Ms Henderson’s experience and apologized to her immediately, as well as giving her a refund at the time of the incident.

We take food quality and hygiene very seriously and unfortunately, on this extremely rare occasion, our restaurant failed to meet the high standards that both we and our customers expect.

We have retrained staff on our stringent food preparation procedures at this store to ensure this doesn’t happen again.”

Previous articleWhy does the child in hands of the beggar always sleeping?
Next articleHow to Meditate? 5 Reasons to Breathe Deeply
Digital Media