Colombo: Fast food chain Kentucky’s Fried Chicken (KFC) has come under scrutiny several times recently.  Not so long ago it apologized a UK student for serving what they believed a chicken brain and was forced to close one of their outlet in Kerala earlier for serving chicken with worms.

This time a resident in Negombo area who went to the KFC outlet in Negombo Sri Lanka had to face this awful experience when he was served chicken with worms. The distraught customer, who bought the fried chicken serving, was aghast to find a fat worm inside his piece of chicken.

The restaurant staff has apologized and quickly taken the plate and his bill away. The incident has occurred around 5.06 PM on 10th March 2014. Consumer has called 119 emergency hotline and they have given the caller with the contact information of consumer authority (94112399746 & 94112445897). Unfortunately, the line was not picked on time despite several attempts, so that the incident could be reported then and there. However the customer has photographed what he faced including how the KFC worker inspecting same. 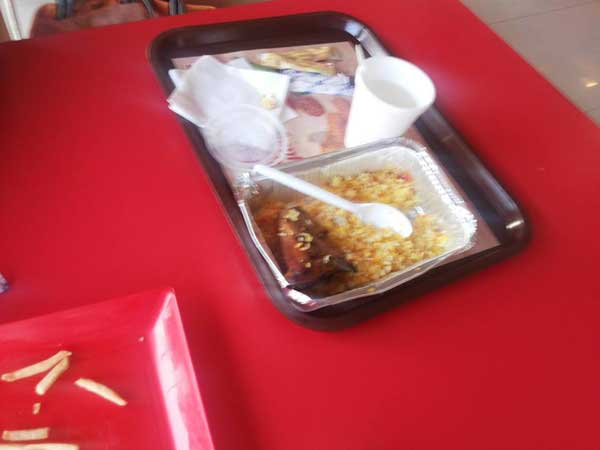 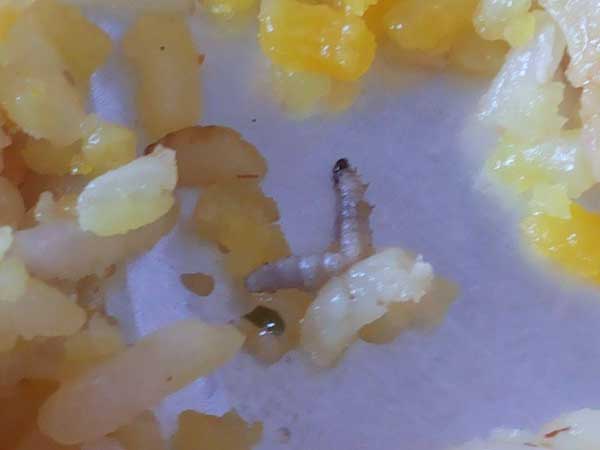 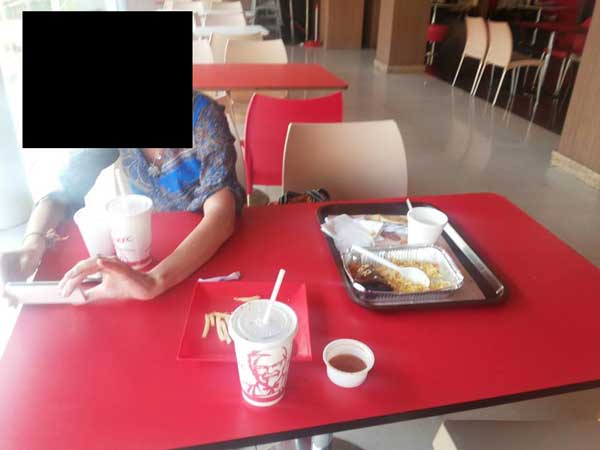 The incident later reported to Consumer Rights Authority and awaits an action against KFC’s gross negligence that is on display after several similar incidents. Previously another consumer had faced similar situation at one of its other outlet in Wellawatta Colombo 06. KFCs all over the world are violating health codes left and right. They are known to ignore adequate sanitation guidelines while allegedly having stocks of chicken that are more than five months old in certain outlets in India.

While it boasts about international standards, there were too many incidents reported proving its ignorance of food safety standards. Many irregularities of food prepared cannot be observed as you receive their food often as fried options where consumers fail to notice its quality.

Their sourcing of food and hygiene level is questioned all over the world with horrible incidents such as these are becoming frequent. Earlier in India a KFC outlet was closed as the authorities found the chicken served to contain 2.8 per cent monosodium glutamate (MSG), said to cause nausea and headaches, retardation and birth defects. On a separate case in Delhi a fly was found in its kitchen and the food safety department under the Madan Lal Khurana-led BJP government in the capital ordered its closure.

Good health and nutrition is what we expect from our meals. Instead when a particular food chain violates all required standards and feed people garbage, it must be exposed so that others will be mindful. Please share this and educate everyone you know of to be mindful when eating from places like these that boasts for standards but never comply with same. If possible to avoid KFC as they have a very bad record in food safety standards and cleanliness. You can refer the following sources for KFC’s food safety violations.

● A KFC in Kansas City, Missouri, was shut down after authorities documented numerous health code violations, including raw chicken and other foods that were being held at 62°F in a nonfunctioning walk-in cooler.

● A Chesterton, Illinois, woman finds a bloody bandage in the bottom of her KFC baked beans. They offered to replace the beans with another helping, but naturally, she declined.

● One more breach of cleanliness to chalk up to KFC: Three workers in Redding, California, were photographed, see here – http://www.nydailynews.com/news/world/kentucky-fried-chicken-trio-photographed-turning-sink-hot-tub-article-1.357020) having a hot-tub party in a kitchen basin, and one of the bright young bathers decided to post the pictures on her MySpace page. KFC’s excuse? No manager was on duty at the time. Apparently, when the cat’s away, the mice take a bath in the sink. Kudos to these employees for reminding us why KFC’s parent company is called Yum!

● In North Carolina, a man claims to have found a smear of human blood in his KFC sandwich. Read more http://consumerist.com/2007/02/20/human-blood-in-kfc/

● A woman in Texas alleged that KFC served her a cockroach-filled sandwich. http://www.kfcmademesick.com/roach.html

● Read the testimonials of former KFC employees, including one who often had to cook and serve rancid, green chicken and another who was told to serve chicken that had fallen on the floor and into the trash! http://www.kfcmademesick.com/testimonial.html

● A KFC in Indiana was closed down for all of 2006 because the health department said it posed an “imminent health hazard” and was a “potential vector of food borne illness.”

● There was a lawsuit filed against KFC after children in Colorado became sick from eating there.

● A KFC in Knoxville, Tennessee, was recently found to have 42 problems (out of a possible 46 items on the inspection list), including toxic chemicals out of place, chicken cooked at a temperature not high enough to prevent people from getting sick, and dirty containers, work stations, counters, and cups, among other things.

● A KFC in Los Angeles County was temporarily closed down in June 2006 for “Vermin infestation.”

● In Missouri, a KFC was documented as having mold on the soda dispensers, dirty towels in the prep area (everyone knows how dirty and germ-filled rags can get), and service items on the floor, among other violations.

● A poor inspection at one KFC in Davenport, Iowa, helped spawn an article with the headline “Trash Cans, Flies and Meat, Oh My!” when flies were found all over a back room.

Remember, this is just a sampling of recent KFC violations throughout the United States. Any online search for the words “KFC” and “health code violation” will turn up loads more! Internationally, the situation isn’t any better.

The New South Wales Food Authority fined a Penrith KFC $1,100 after an acrylic fingernail was found in a box of fries.

At a KFC in Coventry, U.K., a 13-year-old boy found a used needle and other drug paraphernalia sitting on a filthy toilet in the restroom. The boy’s father alerted the manager, who reportedly took 10 minutes to respond to the issue.

A KFC in London was charged with 13 violations of food-hygiene regulations after an inspection uncovered trays of bread and raw chicken caked with black grease, trash bags leaking onto the floor, mold- and dirt-covered food preparation surfaces, and a 1-meter pool of dried blood on the floor, among other things.

Hasn’t KFC learned that people don’t want to eat garbage? Yet another KFC worker, this time in Hong Kong, has been shown packaging and selling chicken from the trash can.

So far, we’ve learned about a KFC in Belfast, Northern Ireland, that was fined almost £12,000 (U.S.$20,000) for serving raw chicken! Check out this BBC article about the whole fiasco. A KFC in Hereford, United Kingdom, pleaded guilty to having a filthy kitchen and dangerously slick floors! Read the full story here!

In China, KFC was accused of using the same frying oil for as long as 10 days, which some experts believe may cause cancer! Click here to get the full story.

Yet another KFC has been fined nearly £13,000 for selling raw chicken to a customer. In November 2005, at the KFC in Plymouth, a woman was sold battered “crispy strips” that were, according to the prosecutor, “flash fried only.” Gross! Read the full story here.

Another KFC in Wales, United Kingdom, was fined £24,000 (US$40,000) for poor hygiene, which health inspectors said included unsanitary practices such as failure on the part of the staff to wash their hands, handling raw and cooked chicken at the same time, and defrosting of chicken in a “filthy” sink! On top of this, inspectors found dirty, greasy floors, surfaces, equipment, and children’s tables “ingrained with food debris”! Click here to get the details.

A mother who took her family to the KFC at Redhill High Street in the UK cut her mouth and tongue on plastic discovered in KFC coleslaw, and her 20-month-old daughter nearly ate some as well! Get the full scoop here.

In China, KFC was using known carcinogens in its food and then an actual poisonous herb; the government told citizens, and KFC finally stopped. Read more about that incident. A KFC in Vietnam was recently found to have unchecked chicken. Chicken contaminated with unsafe levels of salmonella and E. coli were previously found at this same KFC! Click here to read the story about it. Cockroaches at a KFC in Rio Claro, Trinidad, prompted health inspectors to close the store; click here to read more.

It’s no wonder that KFC continually violates health codes—it doesn’t seem to care about anything! Department of Labor records show that KFCs all over the United States continually must pay settlements (sometimes more than $10,000) for violating labor laws, including CHILD labor laws! In New Zealand, KFC workers recently went on strike because of their disgustingly low wages. And it gets worse—check out this video narrated by Pamela Anderson showing all the awful ways that KFC abuses chickens, from cutting their beaks off to boiling them alive! KFC is a company that doesn’t care about people’s health, it doesn’t care about its workers, and it certainly doesn’t care about animals. 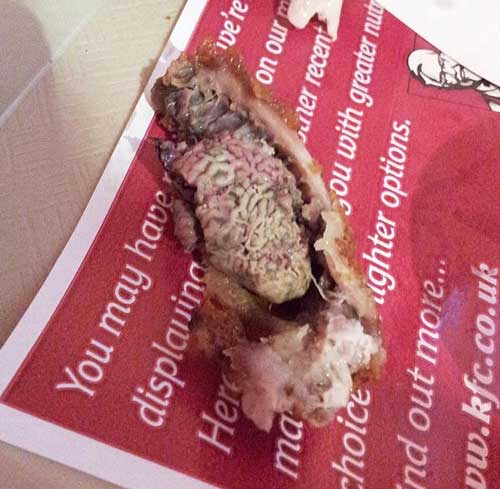 Previous articleSignificance of Medin Poya
Next articleThis Boy Never Saw His Dad As An Inspiration, Until He Found Out His Big Secret
Digital Media