Usually, when a police officer makes you pull over for something you obviously did wrong is never good news.

Especially, in the case when you have an expired registration sticker on your vehicle you are literally asking the authorities to write you a ticket.

This is exactly what happened to a 25-year old individual named Hayden Carlo from Plano, Texas. One day he got pulled over by a police officer and was just about to receive a fine before something truly unexpected occurred.

Hayden Carlo is a person who is struggling to pay the bills to support his wife and two children. 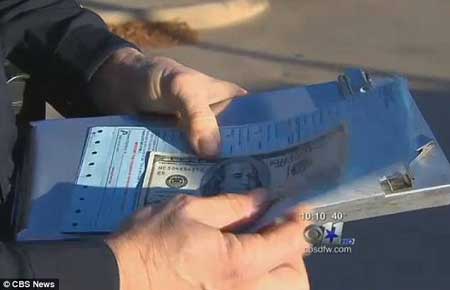 He explained to the cop that he didn’t renew his car registration because he had to make a tough choice. Either feed his kids waiting for him at home or pay for the car bills. There was no other explanation why he hadn’t done it except that he was broke. When the officer heard his story he was obviously moved as he handed Carlo a citation with a $100 bill inside it. When the 25-year-old man opened up the citation he couldn’t believe his eyes.

The police officer wanted to remain anonymous but his act of kindness will be recognized by his colleagues at the station. Mr. Carlo on the other hand was able to update both his and his wife’s registrations and is currently employed at a new job that helps support his family.