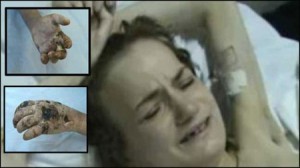 Authorities in Columbus, Ohio, say they may have encountered their first case of the flesh-eating drug, krokodil. A homeless man in Columbus told medics he had used the drug, which derives its name from the green-black lesions it leaves on the skin of users after injection.

“The patient had a large, open wound and it is consistent with what we’ve been seeing, or the trend when people use this type of medicine [sic],” Deputy Fire Chief Jim Davis told WBNS-TV on Friday. 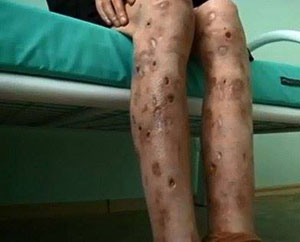 Other cases of the homemade morphine derivative has been reported in Arizona, Illinois and Oklahoma. To date, the Drug Enforcement Administration has not confirmed the presence of krokodil in the United States, although cases in the Chicago suburbs came under investigation in October after a local doctor reported seeing the drug’s telltale gangrenous lesions.

Krokodil was first reported in Russia several years ago. It is made by cooking crushed codeine pills with household hydrocarbons such as paint thinner and gasoline. Krokodil is reportedly cheaper and more potent than heroin, but the impurities in the household chemicals cause flesh to decay after injection. 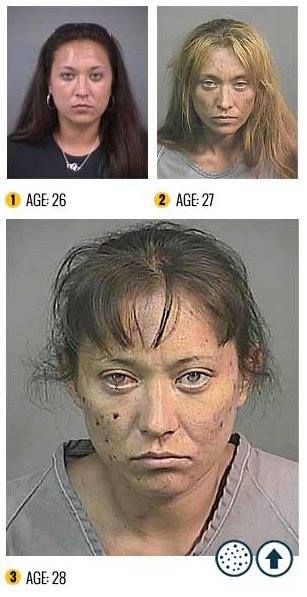 “It almost starts like a burn from a cigarette,” Amber Neitzel, a reported krokodil user, told ABC Chicago affiliate WLS in October. “It starts purple and then goes into a blister after five or six days.”
“You literally start rotting from the inside out,” Dr. Abhin Singla, who said he treated krokodil users in Joliet, Ill., told the Sun-Times. “It’s a horrific way to get sick. “Intensive treatment and skin grafts are required, but they are often not enough to save limbs or lives.”

But despite the horror stories, some officials remain skeptical that the so-called “horror drug” is making inroads in the United States. People who inject drugs put themselves at risk for similar infections if they use dirty needles.

“We see IV drug users with horrible infections on a daily basis,” Oklahoma Bureau of Narcotics spokesman Mark Woodward told The Huffington Post in October. “Infections from bacteria and dirty needles — that doesn’t mean it’s [krokodil].” But some people remain convinced that krokodil is an emerging threat.

“If it’s on the table of our drug users, it’s gonna get out there,” Roger Lowe, who runs a traveling needle exchange in Northeastern Ohio, told WKYC in October. “I think we’re gonna see more of it and I’m terrified of what’s gonna happen.”