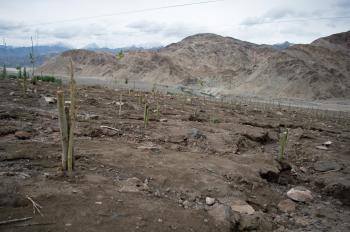 The windswept but blasted landscape of India’s ‘Little Tibet’ is a result of the havoc wreaked by tourism and economic development. By Stella Peters. (Photo Credit : newlotus.buddhistdoor.com)

Over the last several years, India’s ‘Little Tibet’, Ladakh, has increased enormously in popularity among tourists as a beacon of the traditional Buddhist lifestyle. The boost to the economy that the area has consequently experienced, however, comes with a price. The great amount of tourists has taken its toll on the environment by causing scarcity of food, droughts and garbage pollution of the natural area. Fortunately, the nuns of the Buddhist Drukpa Monastery have temporarily put aside their Kung Fu training to focus on improving the environment. 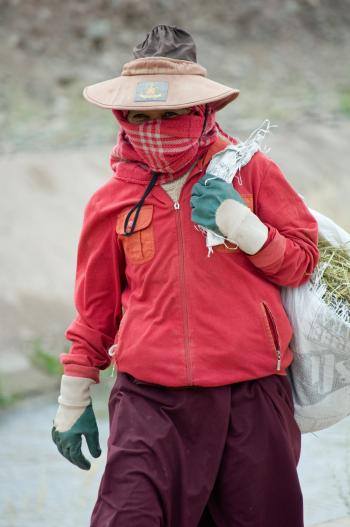 The problems that the tourists create are partially caused by the extreme climate of Ladakh. The thinly populated area is so high up in the mountains that percentage of oxygen in the air is extremely low, and there is little vegetation in the area. The altitude has kept Ladakh isolated from the world for decennia, creating a fragile ecosystem with many rare and endangered species. Traditionally the population was self-sustaining, living of small-scale agriculture and herding. The stream of tourists has stimulated the economy but at a high cost. Hotels exhaust natural resources in their effort to live up to Western expectations of hot, running water and electricity. The food-and-water resources are no longer enough to sustain both the original population and the tourists. Heavily polluting trucks now provide extra resources during periods of draught. As a result garbage disposal has become a major problem causing the pollution of the land and water resources. These problems have wreaked havoc on the fragile environment of Ladakh where mud streams and floods are now common occurrences.

The Drukpa monastery has acknowledged these difficulties and seized the opportunity to rise above their traditional closed-off role and reach out to the community. At the monastery nun Younten elaborates on this decision: ‘for decennia the population of Ladakh saw the Buddhist monasteries as imposing places were educated nuns and monks devote themselves entirely to spiritual learning. However, we mustn’t forget that we are also part of a community. There is so much suffering in the world which we try to relief through puja (ritual). Still, we wanted to do more. Buddha Padmasambhava is honored for his endeavor to improve the spirituality of all living creatures; we strive to accomplish the same. Practicing Kung Fu is for our own spiritual growth, now the time has come to strengthen the environment.’ Younten is one of the few nuns how is at the monastery to oversee the daily rituals and take care of the stray dogs that were taken in. The others are at the plantation, suiting actions to their words. 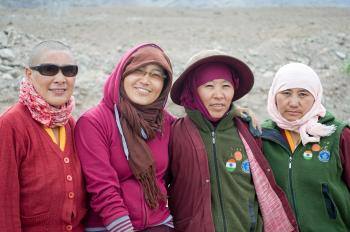 ‘Live to Love’ is now the mantra of the Drukpa monastery. The nuns that practice Kung Fu for their spiritual wellbeing are now committed to improving the fragile environment of Ladakh by planting Ladakhi willows. Pema is one of the nuns whom have spent the last couple of weeks planting trees; ‘It’s hard work, definitely. At times I miss the routine and tranquility of the monastery, especially the Kung Fu routines. But this is important, we’re showing the people that we are part of the community and we are devoted to improving the quality of life in Ladakh.’ Planting trees will certainly work towards that goal by preventing and slowing down mudslides and avalanches, slowing global climate change, protecting water quality, improving air quality for the world and serving as a wildlife habitat.

Last year the Drukpa section set a Guinness World Record for planting the most trees within half an hour and every year they pick up where they left off. Even though the event draws international attention to our environment and the fragility of areas like Ladakh, media attention is merely a byproduct. As Younten observes, ‘it’s not about the world record but about improving the world, one tree at a time.

(This is an article written by Stella Peters to Buddhistdoor international)