Others
By Staff Contributor
November 5, 2013

Valentin Gruener and Mikkel Legarth raise Sirga as a cub after she was abandoned; pair seeks to save lion population through Modisa Wildlife Project. 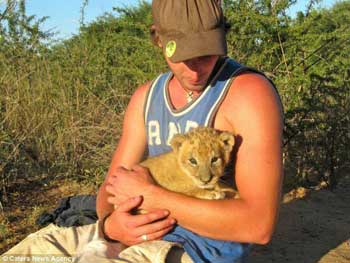 Valentin Gruener and Mikkel Legarth play with Sirga as if she were a family pet. But while she is not a pet, Sirga is considered part of the family, as much as a lion can be part of a human family. It is a touching bond that stretches back to when the two men rescued Sirga as a cub deep in the African bush and became the animal’s surrogate parents. Legarth told the U.K. Daily Mail that his bond with Sirga is similar to her being part of his pride.

“A pride had three cubs and two were killed before Sirga was abandoned without food,” Legarth told the Daily Mail. “It happened on our land and we could not stand by and watch her die.” The two conservationists, working to save the lion population through the Modisa Wildlife Project in Botswana, South Africa, raised the cub and formed an unusual bond with the animal, as you can see in the accompanying photos taken by Nicolai Frederik Bonnin Rossen and in this video:

The video shows Sirga acting as friendly as the family dog, and relates to Gruener and Legarth like she would other lions. But unlike a pet, Sirga, who is kept away from other humans, can hunt down prey on her own at the Grassland Safari Lodge where predators are kept in semi-natural conditions. 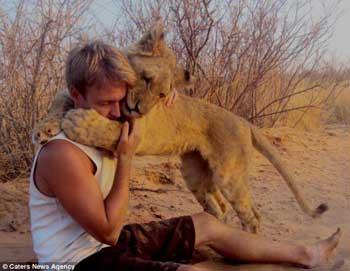 [Sirga] is now a beacon for hoped success of the Modisa Wildlife Project, founded in Botswana, Africa, by Mr. Gruener, from Germany, and Mr. Legarth, who is Danish, with the hope of saving the lion population. Botswana is two and a half times the size of Britain and has vast areas of wilderness—but already increased farming is bringing lions and man into more and more conflict. From a base camp in the African bush the Modisa Wildlife Project has been working with local farmers and Willie De Graaff, owner of Grassland Safari Lodge, to find a long-term solution.

The plan is to relocate the lions, which are coming into contact with farmers, to one large protected area where they have enough wild prey to feed on. ——————— 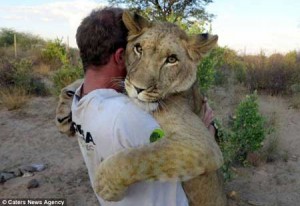 The conservationists made sure Sirga didn’t become like other lions in captivity that are constantly fed by tourists, and she only interacts with Gruener and Legarth, who eventually want to release her back into the wild.

“We are located on Willie De Graaff’s 10,000-hectare farm [roughly 28,000 acres] with lions, wild dogs, and leopards that have been saved from certain death,” Legarth told the Daily Mail. “We are now looking for sponsors that can support us with a long-term solution for those animals.”

So other lions like Sirga can flourish.More heartwarming photos showing Sirga as a cub and young lioness, and one more hug: