Loners tend to be more intellectual and loyal friends. 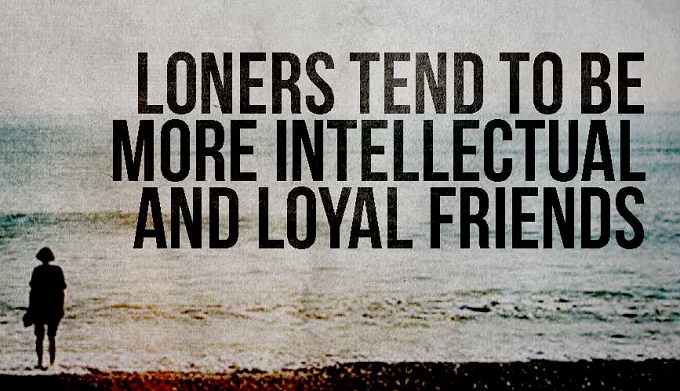 There is a big difference between someone who is a loner-by-choice and a socially rejected person. Contrary to what most people think, being a loner is neither good nor bad.

Loners tend to be individuals who enjoy spending time alone as much, or more so, than they do with their friends (yes, loners do have friends). They have a low need for peer acceptance and affiliation and engage with the world in different ways than others by focusing on their own ideas and being stimulated by solitude, as constant social interactions tend to drain them.

Loners generally have a small circle of close friends and have higher standards for their friendship and trust.

They enjoy spending time with their friends but do not depend on and attach to them like others, though they are highly loyal. Loners are generally more intellectual than others, using their time to enjoy and study anything and everything that interests them. Funny enough, both introverts and extroverts can be loners.

A lot of loners make conscious decisions to spend time away from the big social groups mainly because they understand it’s better to be on their own rather than being ‘used up’ by fake friends.

They recognise that they may have a lot of friends, but don’t see everyone as a ‘best friend’ except for those who really resonate with them, those who know all their negative points and still prefer being with them. In this overtly ‘social’ world,  these friends are hard to find and often if they aren’t found easily, loners don’t settle for anybody and everybody for the sake of it, often being a loner is a better option!

Contrary to popular belief, not all loners have a pathological fear of social contact. “Some people simply have a low need for affiliation,” says Jonathan Cheek, a psychologist at Wellesley College. “There’s a big subdivision between the loner-by-preference and the enforced loner. Those who choose the living room over the ballroom may have inherited their temperament,” Cheek says. “Or a penchant for solitude could reflect a mix of innate tendencies and experiences such as not having many friends as a child or growing up in a family that values privacy.”

There are unhealthy cases of the lonely loners. The lonely introverts’ camp closely borders the land of the socially anxious. Some people, for example, can “pathologically shy” or have bad experiences as children, which likely lays the groundwork for very quiet lifestyles. Those who remain “enforced loners” long to spend time with people, but shyness and anxiety inhibit them from doing so and they become introverts who tend to be alone, they may deep down prefer to be around other people, but because of their shyness, it’s difficult for them to join groups and make friends.

Such loners have several stress-inducing strikes against them: They may get butterflies whenever they have to face in-person encounters, and they are subject to outside pressure to be sociable. When major life problems crop up, loners are also less likely to seek out social support.

John Cacioppo, a psychologist at the University of Chicago, has highlighted social isolation as a health-risk factor on par with obesity and smoking. “Loneliness is like hunger and thirst—a signal to help your genes survive,” Cacioppo says. “When you’re lonely, there’s a stress response in your body, and it’s not healthy to sustain that for a long time.”

But though the term ‘loner’ tends to be pitied and and somewhat feared in our up-with-people culture. The introvert or loner can really reap secret joys from the solitary life and actually have a freer and less stressful experience that can lead to creativity, growth, learning and exceptionally deep and fulfilling relationships with those they choose to bless with their time.

Besides doesn’t it take all types to make up the world? It’s not always the quiet ones you have to be wary of, I promise!

Do you prefer to spend time with yourself rather than others? Share your stories with us….