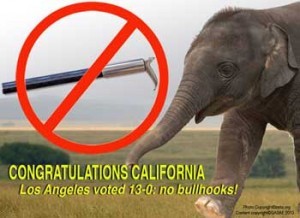 Los Angeles City Council just voted 13-0 to BAN the bullhook. Thank you to all those who worked hard on this, let’s congratulate them and work hard to ban circuses.

Dedicated to Pat Cuviello in San Francisco who has worked for more than 20 years to raise awareness on the nightmare that the elephants and other animal face in circuses. He rocks in so many ways.  Mahalo.

An extract from CBS article 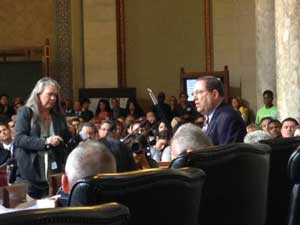 The Los Angeles City Council Wednesday voted to ban the use of bullhooks on circus elephants.

During the meeting, which began at 10 a.m., the council voted unanimously to prohibit the use of ankus or bullhooks, which is a tool used by animal trainers at circuses to keep large elephants in line, starting in 2017.

According to Councilmember Paul Koretz, the hook has a sharp spike attached to it that activists believe is dangerous to the animals and say there are more humane means for controlling elephants available.

“We’ve been taking care of exotic animals, including Asian elephants, for almost 144 years. We really, really are proud of the animal care we provide. Sadly, this ordinance before the City Council we feel is just being driven by a small, vocal group of animal rights activists who are against animals and entertainment whether they’re elephants or any other animal,” Stephen Payne, vice president of Field Entertainment, the parent company of Ringling Bros. Circus, told KNX1070.

Some interesting comments  to this article.

How about no more animal circuses! And no more of those horrible roadside petting zoos where they keep wild animals in tiny cages for people to gawk at for an admission price!

I would like to give you my opinion on the ability of any circus or entertainment entity to provide elephants with a natural life. NO YOU CAN’T. It’s as simple as that. There are many reasons but 2 reasons specifically. 1) Elephants need to walk an average of 50 miles a day in order to stay healthy. There is no way living in a zoo or circus they can do this. 2) They need to be with their extended families. No zoo or circus can have 10 or 15 elephants and care for them adequately. You may be able to provide vet care, food and water but those are not the only things that allow elephants to thrive not just survive.

Thank you from the bottom of my heart LA city council! These animals deserve better than this. Your message was heard loud and clear. BAN THE BULLHOOK!!!!

Why does it take 4 years for this to happen? This should be immediate! Is it true that the LA City Council might ban elephants being used in circuses in LA? I sure hope so!!

I’m from Melbourne Australia. Take it one step further, let all of your exotic animals go to sanctuaries and rehabilitation parks. They have not been put on this earth to be enslaved in circuses. It’s barbaric and extremely cruel.

Thank you, City Council. LA now joins a growing list of cities and countries around the world that have taken steps to protect both the public and animals by banning cruel control methods or wild animal circuses outright. Circuses don’t need wild animal acts to attract visitors as demonstrated by the success of Circus Vargus, Cirque du Soleil, and many others. Harming animals for entertainment is an obscenity that should be swept into the dustbin of history as soon as possible.