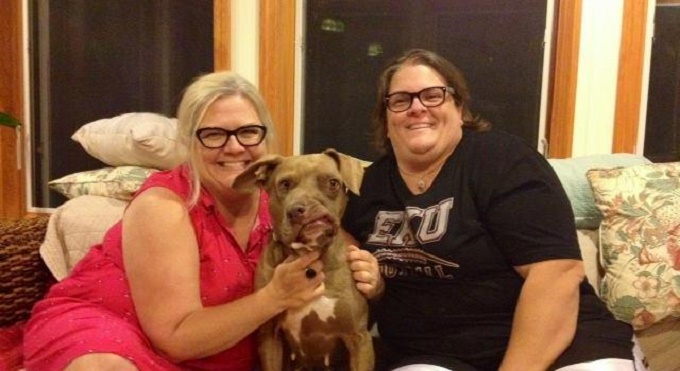 Lucy’s horrific story came to light in 2011 and now, two years later, a loving family (pictured above) has adopted her and given her a safe and healthy forever home.

Originally from Bogota, Colombia, Lucy, an American Staffordshire Terrier, was rescued at the age of three and a half years with a deformed face. This was not the face she was born with though. Over her short life, Lucy endured multiple beatings from her former owner that were so severe that her nose and jaw were broken and never able to set properly, reported Examiner.com.

Correcting her facial structure was ruled out after her rescue as her bones would have to be broken and reset—a pain no one wanted her to endure again, especially since she is able to breathe, eat and drink just fine despite her condition.

It is thought that Lucy was used as a bait dog to train aggression in fighting dogs and that she also served as a breeding female. She was found on the streets of Bogota, emaciated and pregnant. It’s estimated that it would have been her fifth or sixth pregnancy, according to Examiner.com, but in order to save her life, Lucy’s unborn pups had to be sacrificed as a vet examination confirmed that she suffered from a twisted uterus. 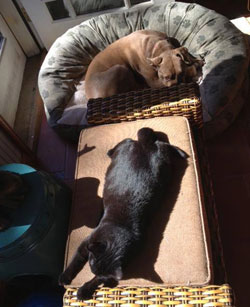 After her Colombia rescue, Lucy was flown to New York City dog rescue, Stray from the Heart and then taken to Kim Barnett, a trainer in Madison, Connecticut who helped Lucy through a long process of physical and emotional recovery. Over time, Lucy learned to trust again and was deemed fit for adoption.

Offers to adopt her poured in as many animal lovers were inspired by her story. Just last week, Lucy finally found her forever home in upstate New York with Paula and Dee who were grieving the loss of their cherished companion, Jezebel. Lucy now has all the freedom she wants to run and play safely in an enclosed full acre of land. She also shares her new home with some friendly feline companions.

“Last night Lucy arrived with Kim who has given her a fantastic life for the past year and a half. She greeted my cats beautifully and made herself at home, sampling every couch. We woke up this morning to a cheerful, loving, force of nature and knew Jezebel had led us to her successor and the cycle of love and change and healing had begun once again. Life goes on and love never dies,” wrote Paula and Dee (via Stray from the Heart’s Facebook Page) upon opening their home to Lucy.

Image courtesy of: Stray from the Heart Facebook Fan Page