Maha Pajapati Gotami, Founder of the Order of Nuns

Pre-eminent women disciples of the Buddha. 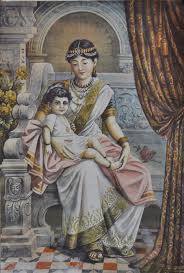 Pajapati Gotami was the Buddha’s foster mother as well as his maternal aunt. King Suddodhana married both sisters Maya and younger sister Gotami. When queen Maha Maya died on the 7th day of the birth of Prince Siddattha her younger sister from that day became the queen and foster mother of the prince.

She felt miserably and lonely when Prince Siddhartha, Rahula his son and her own son Nanda renounced the worldly life for the higher life by entering the Noble Order. King Suddhodana also had passed away on attaining Arahatship. Ordination was now foremost in her mind.

She approached the Buddha on his visit to Kapilavathu and asked for the boon of forming the Order of the Nuns. But three times the Buddha turned down the request. She was dejected and returned home. Soon 500 maidens gathered round her. They too, felt the urge either through bereavement or following their beloved kith and kin to seek ordination. 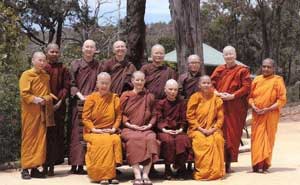 So she determined to make amends. She shaved her hair and donned the yellow robe. Her 500 followers followed her example. Kapilavastu was separated from Jetavana monastery by a distance of 357 miles. She covered the distance with her followers by foot although various chieftains and lords placed chariots at their disposal. The dusty roads in those days were quite unlike the roads of the present day. There were no pavements or sealed surfaces. The gentle feet of Maha Pajapati Gotami were unused to such rough conditions. At the end of the journey they were thoroughly exhausted and travel-worn. The march caused a great stir in the district through which they passed. Such a walk attracted attention and soon the crowds lined the route. She felt that in the circumstances it was not fitting that she should court a refusal by the Buddha. So she and her 500 companions lingered at the entrance of Jetavana monastery when to their great good fortune Venerable Ananda appeared. He was amazed to see his aunt in such a sorry state. He inquired whether any calamity had befallen the royal house of the Sakyans or whether there was a revolt. She assured him there was nothing of the kind but told him the purpose of her mission. Venerable Ananda was eminently fit to play the role of a mediator. Again and again Venerable Ananda entreated the Lord but only to be refused.

Finally, Venerable Ananda asked whether it was not possible for a woman to attain the bliss of sainthood. The Buddha responded by saying that a woman could attain as well as a man and then consented to the establishment of the Order for Nuns, but only on eight conditions.

These were the 8 conditions:

1. A Bhikkuni even if she was in the Order for 100 years must respect a Bhikkhu even of a day’s standing.

2. A Bhikkuni should reside within 6 hours of travelling distance to and from the monastery where Bhikkhus reside for advice.

3. On Observance days a Bhikkhuni should consult the Bhikkhus.

4. A Bhikkhuni should spend the Vassa (rains retreat) under the orders of both Bhikhus and Bhikkhunis.

5. A Bhikkhuni should ply her life by both the orders.

6. A Bhikkhuni should on two years obtain the higher ordination (Upasampatha) by both Orders.

7. A Bhikkhuni cannot scold a Bhikkhu.

8. A Bhikkhuni cannot advise a Bhikkhu rather it should be the other way about.

When Venerable Ananda broached the news to Maha Pajapati Gotami she was glad. She wholeheartedly accepted the conditions laid down by the Buddha. She was true to her destiny, as not long afterwards she became an Arahant. So likewise did her companions on listening to the discourse called the Nandakovada Sutta by the Buddha. The King of Lichchavis built a residence for her and her followers at Vesali.

One day the Buddha accompanied by eighty Maha Arahants and a huge concourse of Bhikkhus visited Pinnacle Hall in the city of Vesali.

At such a sight Venerable Maha Pajapati Gotami was exceedingly glad. The disciples were fully worthy of the Lord as he was of them. She saw that Anna Kondanna, Sariputta, Mogallana, Khema, Uppalawanna, Nanda, Rahula and his mother Yasodhara (Bimba Devi) were to predecease the Lord. She was determined not to tarry but that she should be the first to go. Although she was 120 years old yet signs of old age were not visible. Her hair and teeth resemble those of a girl of 16 years. At the moment of her resolution of obtaining Parinibbana the earth trembled and quaked. The thunder in the sky rent the air. Her companion’s likewise sought release.

She and her companions proceeded to meet the Lord. Compliments were exchanged. Although from the 7th day the prince was reared by her the Buddha amply repaid the debt due to her by her ordination. She gave a graphic picture of the infancy of Prince Siddhartha. How she has fed and bathed the prince.

In the meantime people from far and near flocked to the scene as the news spread. Diverse deities came. Visva Kamma deity who by his psychic power came to the rescue to provide much needed accommodation.

The Buddha requested Venerable Maha Pajapati Gotami to clear doubts about her sainthood. Then she paid tribute by performing many miraculous acts and all present including the Maha Arahants marvelled.

She and her companions underwent the great release — Parinirvana. At last the cremation came to pass. The Lichchavi Princes brought sandalwood for the funeral pyre and the caskets containing the remains were made ready. The whole sky was overcast with the heavenly host during the day. The stars and the moon shone brilliantly overhead as night followed. People laid carpets and the deities held a canopy overhead. It was a unique ceremony the Buddha and the Maha Arahants graced, so the pyre was lit and only the relics of Venerable Maha Pajapati Gotami remained like pearls and those of others vanished from the scene. These relics were placed in the Buddha’s bowl and given to him. The Buddha extolled the virtues of this great Arahant. He himself had ordained her and been her teacher and this was said to dispel any doubts.

The Buddha had a stupa built by the Lichavi Prince and the relics enshrined and the Buddha Himself joined the funeral procession. This was a unique honour paid by the Tathagata.

The Buddha addressing the Monks and laity declared that Venerable Maha Pajapati Gotami was foremost in attainments among the female Maha Arahants of the Noble Order.