Clad in t-shirt and jeans, the 74-year-old tycoon was spotted arriving at the foot of the popular tourist attraction in a BMW with several bodyguards or executive protection specialist. According to the report, Ananda was whisked off to an undisclosed location deep inside the forest in Penang Hill, where his son was having a retreat with 60 others. 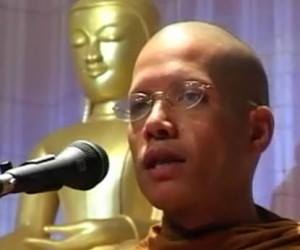 Ven Siripanyo is his only son from a previous marriage. The report said Ven Siripanyo came to the hill retreat on Sunday before staying overnight at a colonial-style building in the forest. According to local residents, the tycoon bought the retreat three years ago before restoring it to its former glory. There are 30-odd rooms in the building.

The daily also reported that Ven Siripanyo was seen putting his palms together and bowing when he saw his father. He then led his father to a garden where Ananda Krishnan took photographs of trees and butterflies as he walked along. It is learnt that the tycoon left the hill at about noon while his son and the others left for Thailand later in the evening.

Ven Ajahn Siripanyo was born to Ananda Krishnan and a Thai mother, the couple has two daughters and an only son who chose to become a monk 18 years ago and never look back. He was educated in UK and speaks eight languages. 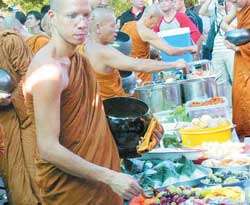 Tatparanandam Ananda Krishnan born 1938 is a Malaysian businessman and philanthropist of Sri Lankan Tamil origin. Nicknamed A-K, he is currently estimated to have a net worth of US$9.6 billion according to Forbes’ latest annual list of wealthiest people, making him the second wealthiest in Southeast Asia behind Robert Kuok, and number 89 in the world.

Ananda Krishnan was born in 1938 in Brickfields, Kuala Lumpur’s “Little India” to Tamil parents, who were Sri Lankan immigrants. He studied at Vivekananda Tamil School in Brickfields and furthered his studies at Victoria Institution, Kuala Lumpur.

Later, he attended the University of Melbourne, Australia for his B.A. (Honours) degree majoring in political science. During that time he boarded in the Melbourne suburb of Hawthorn. Following that, Krishnan obtained a Masters in Business Administration at Harvard University, graduating in 1964.