Man Trapped in the bottom of Atlantic Rescued after 3 Days 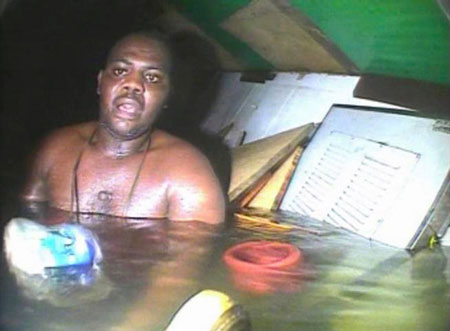 Amazing ly 100 feet down, on the bottom of the Atlantic Ocean, divers had already pulled four bodies out of the sunken tugboat. Then a hand appeared on a TV screen monitoring the recovery. It is incredible. This video shows how a man being rescued from a sunken boat is stunning.

“I was dazed and everywhere was dark as I was thrown from one end of the small cubicle to another,” Okene said in an interview with Nigeria’s Nation newspaper after his rescue. He groped his way out of the toilet and tried to find a vent, propping doors open as he moved. When he found a cabin of the sunken vessel that felt safe, he began the long wait, getting colder and colder.

Using hot water to warm him up, the rescue crew attached Okene to an oxygen mask. He was put into a decompression chamber and then safely returned to the surface. Before the slow ascent began, a voice on the video could be heard asking Okene to give a thumbs up if he understood what was about to happen. Slowly he raised his hand and stuck out his thumb.

“Good job, my friend. Well done,” the voice says. “You are a survivor.”

Check out here the amazing rescue!

Previous articleIsn’t it a pathetic US law? Treating homeless could be a crime
Next articleDo you hear a nice music in a bad smell? Stop complaining, find inspiration
Digital Media