Inspired by what he had heard from friends about Buddhism, Hermann Acker from Oberndorf takes a leap of faith and gets ordained in Sri Lanka after listening to and meeting the Chief Incumbent of the Mihintale Raja Maha Viharaya of Sri Lanka at a function in Germany. 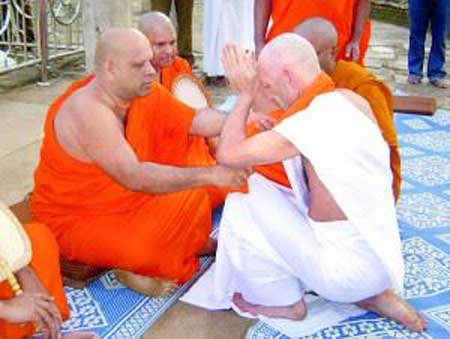 Mr.  Acker (55), who has served as Mayor for over 14 years developed an interest in Buddhism after he heard about the teachings of the Buddha from two of his friends who were frequent visitors to Sri Lanka and keen students of the teachings. The turning point in Mr. Acker’s life came last August when he met the Chief Incumbent of the Mihintale Raja Maha Viharaya Ven. Walawahengunawewe Dharmaratna Thera, who was visiting Oberndorf to chant “pirith” at the wedding ceremony of the daughter of a friend of the Mayor.

“He chanted the prayers in the church where the wedding was held and it was soothing and I was instantly attracted to the sound,” Mr. Acker whose ordained name is Ven. Germaniye Rathanasiri Thera, said. The two had spoken about Buddhism at length and Mr. Acker had asked Dharmaratna Thera if there was a possibility of him being ordained as a monk in Sri Lanka. 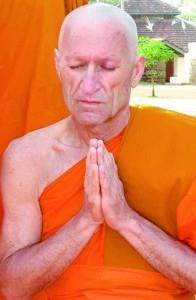 “I was interested and wanted to experience life in a monastery as a monk and I made a request to be ordained and was granted the privilege of being accepted into the order,” he said.

In a ceremony this week, Mayor Acker went through the rituals associated with an ordination having his hair shaved off and being handed the garb worn by a Buddhist monk. Since then he has strictly followed the monastic practices at the Viharaya.

In the lush green climes of the Mihintale Raja Maha Viharaya, Ratnasiri Thera’s daily routine that begins in the early hours of the morning includes meditation, chanting of gathas (stanzas) as well as reading and discussing various aspects of Buddhism with fellow monks. 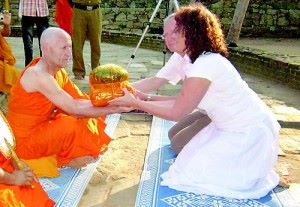 “It’s wonderful being in Sri Lanka and in particular in Mihintale. It is beautiful and is an ideal place to practise Buddhism,” Ratnasiri Thera said. The Chief Incumbent of the Raja Maha Viharaya Dharmartna Thera said he was impressed by the commitment shown by Mr. Acker, since his ordaining.

“He is still undecided whether he wants to continue as Mayor once he returns to Germany. However, he is keen to continue to enhance his knowledge of Buddhism,” Dharmaratna Thera said. 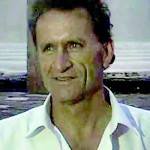 Mayor of Oberndorf Hermann Acker (above), and (right) after ordination Ven. Germaniye Rathanasiri Thera at the Mihintale Raja Maha Viharaya