The Meaning of Buddhism (Part 1) 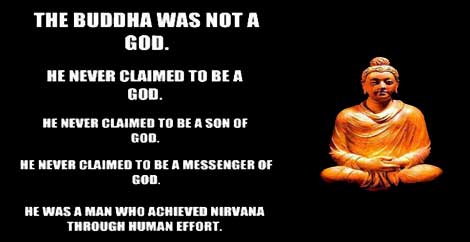 This series of articles regarding the essence of Buddhism consist of three articles will be able to provide you with a clear understanding of its basic principles. Stay tunes as we bring you article each every day and in three days you will be able to understand Buddhism to a greater extent. Do not hesitate to ask any question you may have and share this will those who might be interested knowing what Buddhism is.

The teaching founded by the Buddha is known, in English, as Buddhism. It may be asked, who is the Buddha? A Buddha is one who has attained Bodhi; and by Bodhi is meant wisdom, an ideal state of intellectual and ethical perfection which can be achieved by man through purely human means. The term Buddha literally means enlightened one, a knower. Buddhists believe that a Buddha is born in each aeon of time, and our Buddha—the sage Gotama who attained enlightenment under the bo tree at Buddh Gaya in India—was the seventh in the succession.

Gotama was born the son of an Indian king on the border of modern Nepal 623 years before Christ. The wise men of the kingdom foresaw that he would become either an emperor or a Buddha, and his father, wanting him to be an emperor, kept him utterly secluded from all unpleasant things, so that he might not become wise by seeing life. But the gods knew that Gotama must become the Buddha, and so they visited earth in various forms to let him see them. On three successive days, while on his way to the royal park, Gotama saw an old man, a sick man, and a corpse, and thus he learned that men—all men—must suffer and die. On the fourth day he saw a monk; from this he understood that to learn the way of overcoming man’s universal sorrow lie must give up worldly pleasures. Accordingly, in his twenty-ninth year, he renounced his kingdom and became an ascetic.

Gotama wandered about the countryside, a seeker after truth and peace. He approached many a distinguished teacher of his day, but none could give him what he sought. He strenuously practiced all the severe austerities of monkish life, hoping to attain Nirvana. Eventually his delicate body was reduced almost to a skeleton. But the more he tormented his body the further away he was from his goal. Realizing the futility of self-mortification, he finally decided to follow a different course, avoiding the extremes of pain and indulgence.

The new path which he discovered was the Middle Way, the Eightfold Path, which subsequently became part of his teaching. By following this path his wisdom grew into its fullest power, and he became the Buddha.

As a man Prince Gotama, by his own will, love, and wisdom, attained Buddhahood—the highest possible state of perfection—and he taught his followers to believe that they might do the same. Any man, within himself, possesses the power to make himself good, wise, and happy.

All the teachings of the Buddha can be summed up in one word: Dhamma. It means truth, that which really is. It also means law, the law which exists in a man’s own heart and mind. It is the principle of righteousness. Therefore the Buddha appeals to man to be noble, pure, and charitable not in order to please any Supreme Deity, but in order to be true to the highest in himself.

Dhamma, this law of righteousness, exists not only in a man’s heart and mind, it exists in the universe also. All the universe is an embodiment and revelation of Dhamma. When the moon rises and sets, the rains come, the crops grow, the seasons change, it, is because of Dhamma, for Dhamma is the law of the universe which makes matter act in the ways revealed by our studies of natural science.

If a man will live by Dhamma, he will escape misery and come to Nirvana, the final release from all suffering. It is not by any kind of prayer, nor by any ceremonies, nor by any appeal to a God, that a man will discover the Dhamma which will lead him to his goal. He will discover it in only one way—by developing his own character. This development comes only through control of the mind and purification of the emotions. Until a man stills the storm in his heart, until he extends his loving-kindness to all beings, he will not be able to take even the first step toward his goal.

Thus Buddhism is not a religion at all, in the sense in which the word is commonly understood. It is not a system of faith or worship. In Buddhism, there is no such thing as belief in a body of dogma which must be taken on faith, such as belief in a Supreme Being, a creator of the universe, the reality of an immortal soul, a personal savior, or archangels who are supposed to carry out the will of the Supreme Deity. Buddhism begins as a search for truth. The Buddha taught that we should believe only that which is true in the light of our own experience, that which conforms to reason and is conducive to the highest good and welfare of all beings. Men must rely on themselves. Even though he may “take refuge in Buddha,” the expression used when a man pledges himself to live a righteous life, he must not fall victim to a blind faith that the Buddha can save him. The Buddha can point out the path, but he cannot walk it for us.

The truth which the Buddhist sees when he looks around him is the truth of cause and effect. Every action, no matter how insignificant, produces an effect; every effect in its turn becomes a, cause and produces still further effects. It is meaningless to inquire for a First Cause. A First Cause is inconceivable; rather, cause and effect are cyclical, and this universe when it dies and falls apart will give rise to another universe, just as this one was formed from the dispersed matter of a previous universe. The origin of the universe, like that of every individual person or thing in it, is dependent on the chain of previous causes, which goes on and on in an endless cycle of birth, death, and rebirth. This is the principle of dependent origination.

What of the soul? The Buddha taught that there is no soul or self, and he used the metaphor of the cart. If you take away the wheels and axles, the floorboards and sides, the shafts, and all the other parts of the cart, what remains? Nothing but the conception of a cart, which will be the same when a new cart is built. So the uninterrupted process of psychophysical phenomena moves from life to life. Each life passes instantaneously in death to a new life, and the new life is the effect of the causes in the old life. A candle flame at this instant is different from the flame that burned an instant ago, yet the flame is continuous.

Thus in the chain of interdependent causation all phenomenal existence is constantly changing. The elements combine and recombine with no underlying substance, or soul, to give them permanence. This is the Wheel of Life. The main cause of the restlessness, the suffering, which is the lot of beings turning on the Wheel of Life, is craving or selfish desire for existence, and it is this desire which sets the life force in motion. Desire is manifested in action. This action is in reality volition or will power, which is responsible for the creation of being. It is called karma in Sanskrit, but in the Pali language, which the Buddha spoke and in which all the Buddhist scriptures were written, it is softened to kamma.

Part 2 of this will be published tomorrow at the same time.  May the guidance of noble triple gem be with you.

Previous articleWhat is love? This story will answer your question…
Next articleThe Meaning of Buddhism (Part 2)
Digital Media