The Meaning of Buddhism (Part 2) 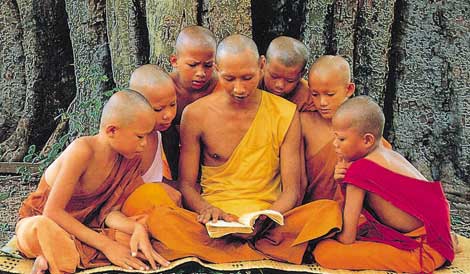 In this universe in which nothing is permanent all change is governed by kamma or the kammic force. Kamma means action. In its general sense, kamma means all good and bad actions. Kamma refers to all kinds of intentional actions whether mental, verbal, or physical, that is, all thoughts, words, and deeds. In its ultimate sense kamma means all moral and immoral volition.

Kamma, though it activates the chain of cause and effect, is not determinism, nor is it an excuse for fatalism. The past influences the present, but does not dominate it. The past is the background against which life goes on from moment to moment; the past and the present influence the future. Only the present moment exists, and the responsibility for using the present moment for good or ill lies with each individual.

Every action produces an effect; it is cause first and effect afterward. We therefore speak of kamma as “the law of cause and effect.” If you throw a stone into a pond, the ripples spread out to the shore, but that is not all, for the ripples return inward until they touch the stone again. The effects of our actions come back to us, and as long as our actions are done with evil intent, the waves of effect will come back to us as evil. But if we are kind and keep ourselves peaceful, the returning waves of trouble will grow weaker until they die down and our good kamma will come back to us in blessing.

In the world around us there are many inequalities in the lot of man—some are rich, others are poor, some live full lives, others die young, etc. According to Buddhism, the inequalities which exist are due, to some extent, to environment—which is itself shaped by cause and effect—and to a greater extent to causes, that is kamma, which are in the present, the immediate past, and the remote past. Man himself is responsible for his own happiness and misery. Thus kamma is not fate nor destiny nor blind determinism. Man has a certain amount of free will; he can modify his actions and affect his future. Each act, whether mental or physical, tends to produce its like. If a man does a good deed or thinks a good thought, the effect upon him is to increase the tendencies to goodness in him.

The understanding of kamma gives us power. The more we make the doctrine of kamma a part of our lives, the more power we gain, not only to direct our future, but also to help our fellow beings more effectively. The practice of good kamma, when fully developed, will enable us to overcome evil and even to overcome kamma itself, thus bringing us to our goal, Nirvana.

The principle of dependent origination and the law of kamma provide the background for understanding the nature of rebirth. According to Buddhism, death is “the temporary end of a temporary phenomenon.” It is not the complete annihilation of the being, for although the organic life has ceased, the kammic force which hitherto actuated it is not destroyed. Our physical forms are only the outward manifestations of the invisible kammic force. When the present form perishes, another form takes its place according to a good or bad volitional impulse—the kamma that was the most powerful—at the moment before death.

At death the kammic force remains entirely undisturbed by the disintegration of the physical body, and the passing away of the present consciousness creates the conditions for the coming into being of a fresh body in another birth. The stream of consciousness flows on like a river which is built up by its tributaries and dispenses its water to the countryside through which it passes. The continuity of flux at death is unbroken in point of time; there is no breach in the stream of consciousness, and therefore there is no room whatever for an intermediate stage between this life and the next. Rebirth takes place immediately.

The present being, present existence, is conditioned by the way one faced circumstances in the last and in all past existences. One’s present character and circumstances are the result of all that one has been up to the present, but what one will be in the future depends on what one does now in the present. The true Buddhist regards death as a momentary incident between one life and its successor and views its approach with calmness. His only concern is that his future should be such that the condition of that life may provide him with better opportunities for perfecting himself.

Buddhism teaches that with the practice of meditation and concentration the memory can be trained. By meditation and mind culture one can acquire the power to see one’s rebirth as a link, or a succession of links, in a chain of births; one can also acquire the power of looking back into one’s previous lives. Not only this, but Buddhism also teaches that with the attainment of Nirvana in this life itself, through enlightenment and true wisdom, one can reach the end of this chain of rebirths.

Nirvana, the state to which all Buddhists aspire, is the cessation of desire and hence the end of suffering. Nirvana in Sanskrit means “the blowing out.” It is understood as the extinguishment of the flame of personal desire, the quenching of the fire of life. Among Westerners Nirvana is often thought of as a negative state, a kind of “nothingness.” But in the Buddhist scriptures it is always described in positive terms; the highest refuge, safety, emancipation, peace, and the like. Nirvana is freedom, but not freedom from circumstance; it is freedom from the bonds with which we have bound ourselves to circumstance. That man is free who is strong enough to say, “Whatever comes I accept as best.”

Nirvana is the dying of the kammic force. The Buddhist ascends to Nirvana through many stages of the Middle Way, the path of wisdom, morality, and control. There is not space enough here even to mention these phases or the various aspects of the regimen recommended by the Buddha in his vast scriptures; but it may be taken for granted that the life of the conscientious Buddhist is full and rich. Through the cycle of rebirths he ascends, he perfects himself, he conquers his cravings through wisdom and love. Slowly the kammic force ebbs away, the flame dies down.

At the root of man’s trouble is his primal state of ignorance. From ignorance comes desire, which sets the kammic force in motion. Hence the way to Nirvana lies through knowledge, and we come again full circle to Dhamma, the Buddha’s teachings. For in Dhamma, as truth, lies release from ignorance and desire and perpetual change, and the Buddha has shown us the way to truth.

Part 3 of this will be published tomorrow at the same time.  May the guidance of noble triple gem be with you.