The Meaning of Buddhism (Part 3) 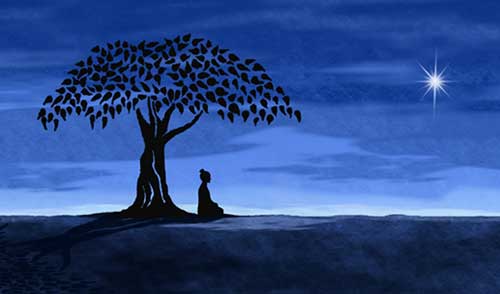 What, then, is the meaning of Buddhism? Ultimately Buddhism, although not strictly speaking a religion, is a systematic exercise in spirituality, certainly one of the greatest ever conceived. It offers the individual a means by which he may fulfill himself through understanding, reaching eventually the plane of the supraperson on which both the self and self-knowledge are no longer useful. Meister Eckhart, the great Christian mystic, said: “The kingdom of God is for none but the thoroughly dead.” The Buddhist would agree, though he would probably prefer a less grim way of saying it. Nirvana in life, the peace which “passeth all understanding,” is the conquest of life, the discovery of the permanent in its flux of psychophysical accidents and circumstances. The Buddhist believes that through meditation and good hard thought he can follow the Buddha through the successive stages of enlightenment and achieve at last the perfect wisdom which surmounts all need.

But by no means all Buddhists are monks or adepts. What does Buddhism mean for the ordinary person going about his work in the world? All through the Buddha’s teaching, repeated stress is laid on self-reliance and resolution. Buddhism makes man stand on his own feet, it arouses his self-confidence and energy. The Buddha again and again reminded his followers that there is no one, either in heaven or on earth, who can help them or free them from the results of their past evil deeds. The Buddhist knows that the powers of his own mind and spirit are enough to guide him in the present and shape his future and bring him eventually to the truth. He knows that he possesses a strength which is ultimately unsurpassable.

Moreover, Buddhism points unequivocally to the moral aspect of everyday life. Though Nirvana is amoral, in the sense that final peace transcends the conflict of good and evil, the path to wisdom is definitely a moral path. This follows logically from the doctrine of kamma. Every action must produce an effect, and one’s own actions produce an effect in one’s own life. Thus the kammic force which carries us inevitably onward can only be a force for good, that is, for our ultimate wisdom, if each action is a good action.

This doctrine finds its highest expression in metta, the Buddhist goal of universal and all-embracing love. Metta means much more than brotherly feeling or kindheartedness, though these are part of it. It is active benevolence, a love which is expressed and fulfilled in active ministry for the uplifting of fellow beings. Metta goes hand in hand with helpfulness and a willingness to forego self-interest in order to promote the welfare and happiness of mankind. It is mettawhich in Buddhism is the basis for social progress. Metta is, finally, the broadest and intensest conceivable degree of sympathy, expressed in the throes of suffering and change. The true Buddhist does his best to exercise metta toward every living being and identifies himself with all, making no distinctions whatsoever with regard to caste, color, class, or sex.

In addition, of course, the teachings of the Buddha are a prime cultural force in Oriental life, just as the Bible is the ultimate source of much Western art and thought. The Buddhist scriptures are larger and more detailed than the Christian Bible, however, and in translation would fill a dozen volumes. In Pali, the language of the scriptures, the Buddha’s teachings are called Tripitaka, which means “The Three Baskets.”

Vinaya Pitaka, “The Basket of Discipline,” consists of five books which expound the rules of monastic life. Sutta Pitaka, “The Basket of Discourses,” is a collection of discussions, stories, poems, and proverbs, written in simple language, imparting all the precepts of practical Buddhism. The third basket, Abhidhamma Pitaka, or “Basket of Ultimate Things,” deals with epistemological, metaphysical, and psychological matters and is of interest mainly to trained philosophers.

Thus the Tripitaka offers cohesive guidance at every level of intellectual, ethical, and spiritual activity. The Buddha’s word is light, a lamp for Burma—and for everyone.

Thank you for tuning in with us for this article series and sharing it with your friends and family.  May the guidance of noble triple gem be with you.