Shocking news that emerged will make you think many a times before you’d take any medication going forward. When you actually analyze the pharmaceutical industry you will come to realize that most medications that we take aren’t the best for our conditions. Often drugs are produced to match the majority but can it guarantee that 100% of humans can be cured with the same drugs? Shouldn’t there be exceptions.

On a separate note, it is a known fact that some medications are tested on poor African communities, as they are easy testing subjects to some players in the pharmaceutical industry. Others are checked on poor animals such as rats, rabbits and monkeys. However, the truth is that some chemically made medications as oppose to organic medication methods can cause severe after effects that you might only be able to notice until very late. Chances are that you may not notice them at all. Instead treat those all over again taking it as a separate disease. The following report is controversial on its nature but has lot more to keep us questioning the medication we take.

An American woman whose skin turned silver after using nose drops is warning people of the dangers of medicines containing the metal. Rosemary Jacobs, 71, has lived with the irreversible skin condition argyria for 60 years and it has blighted her life. The retired primary school teacher’s skin started to turn silver when she began using nasal drops containing colloidal silver (CS) at the age of 11. 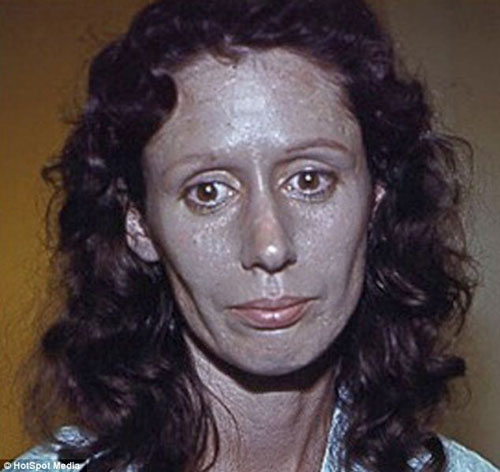 Four years later, a skin biopsy revealed silver particles bound deep beneath her skin and she was diagnosed with argyria. Argyria is a condition caused by exposure to chemical forms of the element silver. It causes the skin to become blue or bluish-grey coloured and develops because silver accumulates in the body over time. It is thought to be irreversible. Ms Jacobs, from Vermont, U.S., said: ‘When I was 11 years old, my mother mentioned to an ENT specialist that I always had a cold. ‘He told me that it had to be allergies and prescribed nose drops that contained silver recommending I take them “as needed”.’

Ms Jacobs took the nose drops whenever she had a stuffy nose and it was only until a nurse spotted her argyria that she saw a dermatologist and was diagnosed. 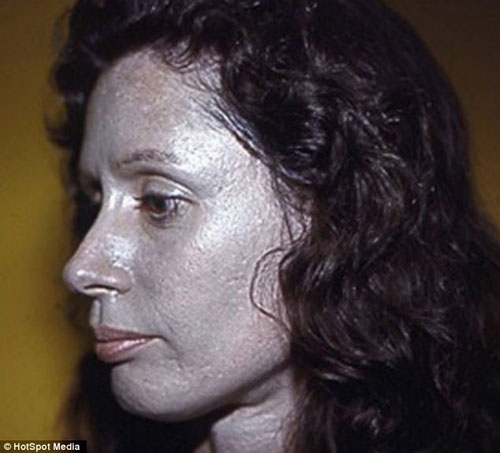 Ms Jacobs (pictured at the age of 36) said: ‘People point and stare, calling me names and telling me to take my Halloween makeup off’ 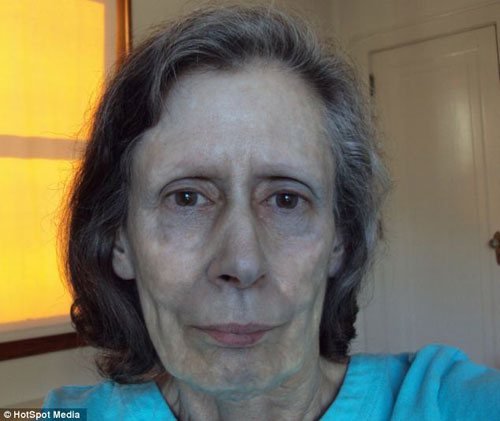 Ms Jacobs has argyria – a condition which is caused by the build up of silver in the body. The main symptom of the condition is that the skin takes on a blue hue

But in the 1950s no treatment was available so she was forced to live with the skin condition.

WHAT IS ARGYRIA AND WHAT CAUSES IT?

Argyria results from prolonged contact with, or ingestion of, silver. It occurs when silver builds up in the body staining the skin a bluish colour. The condition is most commonly seen in workers involved in silver mining, refining or manufacturing. Cases have also been attributed to taking colloidal silver dietary supplements and surgical procedures involving using silver sutures. The condition is very rare and does not usually cause other symptoms.

She was subjected to cruel comments from strangers who would think she had a contagious disease and would cross the street when they saw her. Ms Jacobs, who lives alone and has never had a long term relationship, said: ‘They told me my colour was permanent. It was devastating. ‘I have not been a normal colour since and it has blighted my life. ‘People point and stare, calling me names and telling me to take my Halloween makeup off. ‘Some even say I look like the walking dead.

‘I used to get asked where I was from and what languages I speak. ‘It’s really hurtful, even though I have looked this way for such a long time I still long to look “normal”. Ms Jacobs has even been discriminated against by employers who refused to hire her because of the way she looks. 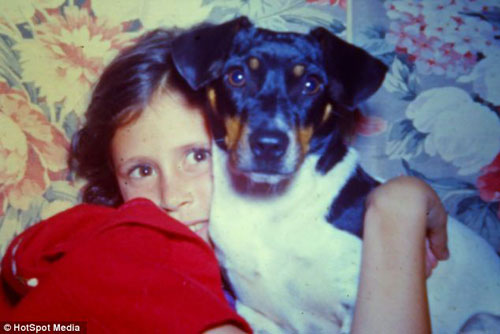 An air hostess once tried to give her oxygen on a plane, after thinking the blood had drained from her face. At 36, desperate to rid her body of its silver hue, Ms Jacobs underwent a skin dermabrasion, where the top layer of skin was removed, leaving it red raw. Her face healed, but she was left with a pink and blotchy complexion with patches of grey still visible. She said: ‘The dermabrasion didn’t hurt at all, it just looked awful for a while afterwards. It took about six months to know what the final colour would be. 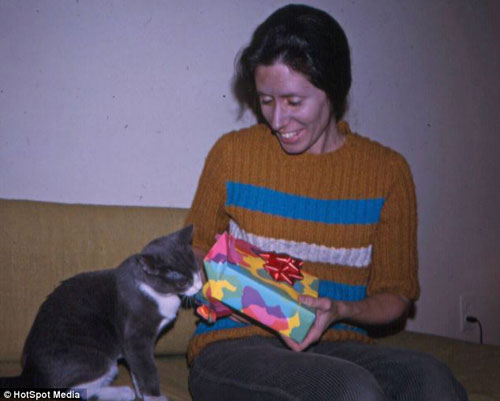 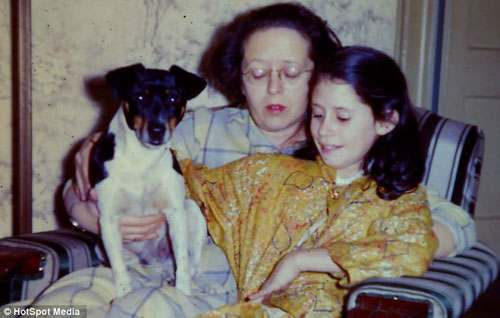 Ms Jacobs (pictured with her mother, Rose, before her skin turned silver) says an air hostess on a plane once tried to give her an oxygen mask when she saw the colour of her face

‘I did it as an experiment, but I would never let anyone dermabrade my upper or lower eyelids so I knew that if it worked I’d end up looking like a raccoon, so basically still weird.  ‘I don’t think I look much better now.’

Now, after years of verbal abuse, cruel remarks and severe skin treatments, Ms Jacobs is determined to raise awareness of the dangers of taking supplements and medicines containing silver. She believes there has been an increase in dietary supplements containing it and says they should have warning labels about argyria. 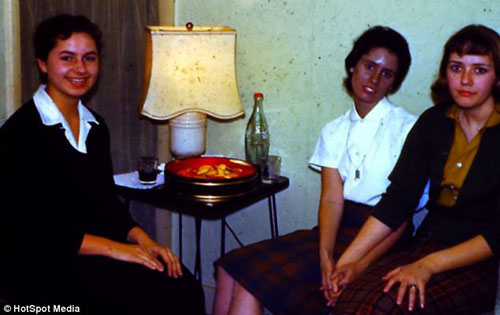 At 36, Ms Jacobs underwent a skin dermabrasion, where the top layer of skin was removed. Her face healed, but she was left with a pink and blotchy complexion with patches of grey still visible 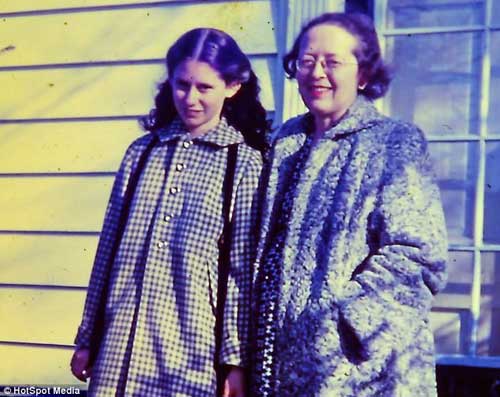 Ms Jacobs (pictured with her mother, Rose, when her condition was developing) said: ‘The change in my skin colour was so slow I didn’t notice. My family and friends didn’t notice either because they saw me every day. I didn’t notice until it was too late’

She said: ‘Silver is still present in lots of products sold on the internet.

‘Taking it can ruin your life and people need to know that.

‘The change in my skin colour was so slow I didn’t notice. My family and friends didn’t notice either because they saw me every day.

‘I didn’t notice until it was too late.’

There are a few dozen other cases of argyria worldwide. The most famous was Paul Karason, from California, known as the ‘Papa Smurf’, who died of a heart attack in September this year.