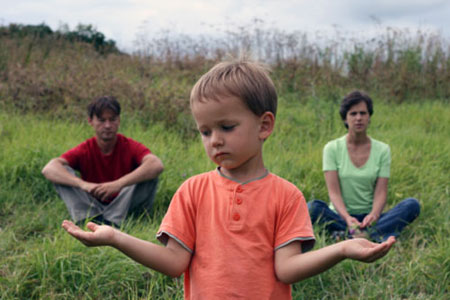 Recently I’ve seen several articles about the college-age children of  “helicopter” parents and how these young people don’t function well when mommy and daddy aren’t around. I’ve also learned there is a “mindful parenting” movement (also “attachment” parenting, “green” parenting, and “free-range” parenting, the latter of which sounds like something that would require open prairies).

My children are adults now, so I’m mostly out of the parenting biz. Looking back, I don’t think my parenting “style” ever rose to the level of a movement methodology.  Well, not unless there’s a “what the bleep do I do now?” movement. The only book I ever consulted was one of Dr. Spock’s, which was so old it still discussed when the kids should get their smallpox vaccines.

I found a couple of articles on mindful parenting, and apparently this boils down to using mindfulness to manage one’s own stress while practicing non-attachment (which is not the same as detachment) with one’s children. An established mindfulness practice could help a parent avoid a lot of parenting pitfalls, I would think.

Helicopter parenting sounds like a first-world type problem to me, although I could be mistaken. According to an article in the Chronicle of Higher Education, increasing numbers of parents are calling college professors about their children’s grades, while the offspring do not cope with college life because they cannot think for themselves or handle stress.

From a Buddhist perspective, this sounds ego-attachment, big time, on the parents’ part. I once heard a sister Zen student say that parenting is a process of letting go. So true.

Again looking back, one of the two things I got right as a parent was knowing when to back off and let the children do things for themselves. However, to some, this made me a “bad” parent.

I remember attending some sort of party — a baby shower, maybe — where there were a number of mothers with small children. My four-year-old son had used the potty and was fumbling to re-zip his pants. He had accomplished this task before, so I knew he could do it, and was just watching in case he got flustered. Then another woman rushed up, zipped the pants, turned to me and demanded, “What sort of mother are you?”

One who figured the kid had to learn to zip his own pants, apparently. Oh, and the other thing I got right was that my babies never had diaper rash. Other than that, I was pretty much a disaster. But my adult children are lovely people, even so.

For the past few years us “converts” have been debating how to incorporate Buddhism into family life, especially child raising. Some data revealed that “dharma brats,” children of Buddhist convert parents, rarely take to Buddhism themselves. This is not necessarily a problem, because I don’t think everybody has to be Buddhist.

My second bit of advice would be, “parenting is not about you.” If your chief concern is to be a “good” mother or father, you are missing the point.  It’s not about you “being” anything; it’s about responding to the ever-changing needs of the child.

And my third bit of advice is to be careful about advice. There’s some really bad advice out there.